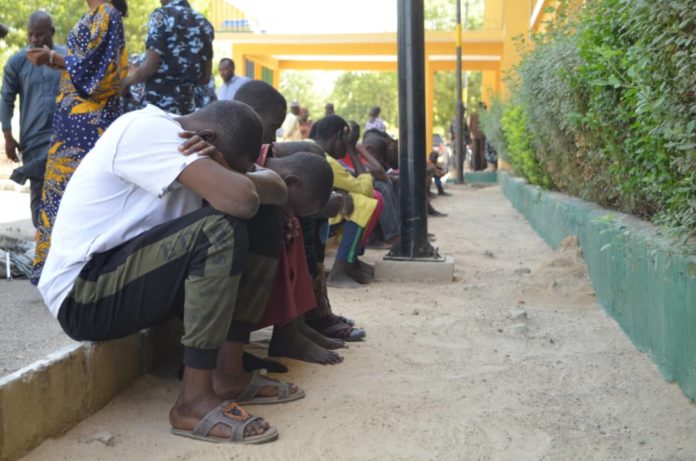 Eighteen suspects have been arrested by the Borno State Police Command for rape, vandalizing and possession of dangerous weapons in Maiduguri Metropolitan Council (MMC and Jere Council in the state.

NigeriaCrime.com gathered that the suspects were arrested in the first two weeks of January 2023.

Parading the suspects on Friday in Maiduguri, the Police Commissioner, Abdu Umar said: on January 18, 2023, Abdullahi Mohammed was arrested by the Crack Operatives based on a tip-off with the alleged stealing of a solar inverter valued at N2 million.

“During the interrogations, the suspect; however confessed to having stolen it at a solar borehole with Musa Ajakuta at Njimtilo village,”

According to him, all the atrocities committed by the suspects were thoroughly investigated before their prosecution in the courts.

Two other suspects, identified as Tujja Ali, 18 and Modu Bilal, 19 were also arrested for having 283 pieces of bolts and nuts.

The CP explained that the criminal conspiracy, mischief and theft of government property were committed by the duo.

He said the stolen materials were alleged to have been loosened after dismantling the high tension electricity tower along the Maiduguri-Damaturu Road.

According to him, the suspects revealed that this is their second time committing a similar crime, as they sold the first stolen property to one Mele in Benisheikh.

He noted that efforts are being made in the arrest of Mele to recover the stolen electrical materials.

On criminal conspiracy and public disturbances with dangerous weapons, he said: “One Sunusi Abubakar, 20, from Shuwari area, noticed some boys running within the area and sighted some youths who called themselves, Karangiya group,” adding that they were armed with sticks and cutlasses and started beating Mohammed Alhaji Bukar, while his friend ran away.

“While beating the victim to run for his dear life, Ali Bukar, 18, of the Al-Miskin IDP camp used a knife and attempted to cut off the victim’s head.”

The police boss explained that; “But the victim used, his left hand and shielded his head, while his hand was cut off by the suspects and run away from the scene.”

He added that the principal suspect, Ali Bukar and five others were arrested for investigation, before prosecuting them in court.

According to him, five other suspects were also arrested in January 2023 for raping five girls in Shani and Gwange communities of Maiduguri metropolis.

Speaking of the suspects, CP, Abdu Umar said: “Either you repent of get caught and face the wrath of the law,

“No person or groups of Individuals are allowed to infringe on the fundamental rights of others,” he said, adding that these include the rights to live and own property.

In a breakdown of cases, he said that there are two each for rape, and culpable homicide, while six are for vandalizing electrical equipment and the ongoing 50 megawatts gas plant project in Maiduguri.

He warned that no arrested suspects would go free in any part of the state.