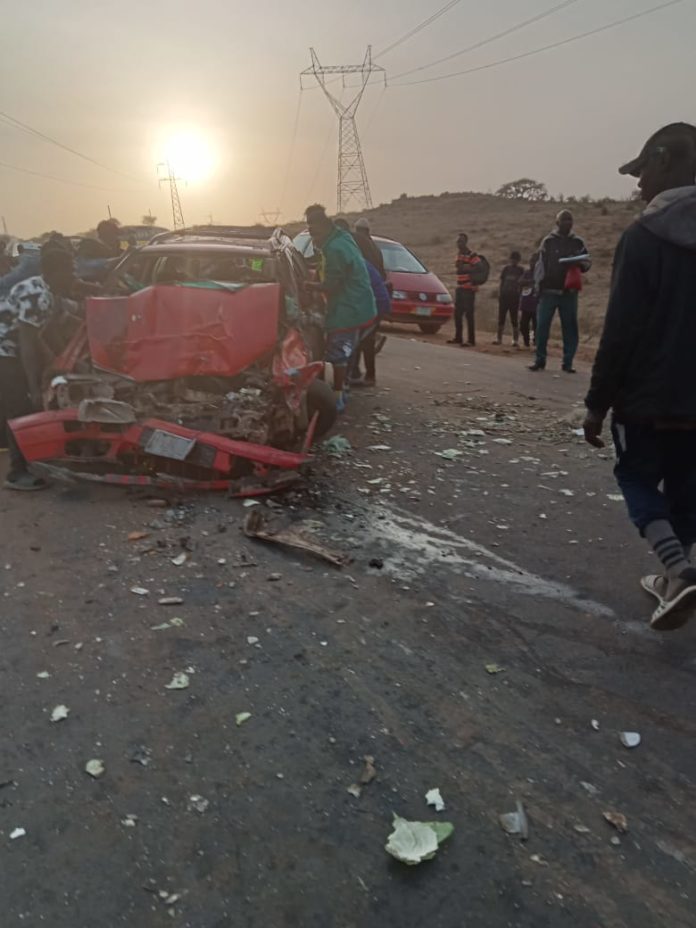 Two people have been confirmed dead while 52 others sustained injuries in an accident that occurred on Sunday evening along the Zakaliyo community in the Jos North local government area of Plateau State.

NigeriaCrime.com gathered that the accident occurred because a faulty truck had been left on the road, undergoing repairs for about four days thereby forcing commuters to resort to using a single lane as some vehicles were ascending and descending, another truck loaded with cement lost control and crush more than 15 vehicles and one tricycle.

According to residents in the community, over 50 injured victims are currently receiving treatment in hospitals.

A resident, Ishaya Ben said, “15 vehicles and one tricycle were involved, 33 people badly injured, 14 in very critical condition, and a woman died at the spot.”

“14 vehicles were affected, 54 people were involved, two adult females were killed and 52 people injured. The cause of the crash was that a trailer failed its brakes lost control and ran into other vehicles.

“The rescue operation was carried out by FRSC Ambulance and Emergency Response Team stationed along Jos – Bauchi Route and Officers and men of FRSC Jos Bye Pass Unit Command and the injured victims of the crash were taken to Plateau Specialist Hospital and Toro General Hospital for medical attention.

“The corpses of the deceased were taken by their family members for burial after being confirmed dead at the hospital. Vehicle operators are advised to ensure proper preventive maintenance of their vehicles, avoid speed, ensure the installation of speed limiting devices, and should not permit underage driving or unlicensed persons to drive.”

Meanwhile, 16 survivors of Saturday’s truck crash close to Panyam have been discharged from various health facilities in Mangu town where they received treatment.

According to Yiljap Abraham, Director, Directorate of Media and Publicity Atiku-Okowa, Mutfwang-Piyo Campaign Council, “13 were discharged from Nissi Dominus hospital. Three patients are still on admission to this facility. One had undergone surgery and is reported to be in stable condition.

Another was referred to JUTH. At Infinity Hospital also in Mangu, two were discharged while one was discharged from Nanret clinic.

“The Jos University Teaching Hospital continues to hold and attend to the highest number of the injured. It has 29 of the injured from Saturday’s crash still on admission and 16 from the Bisichi bus crash when they were travelling to Shendam for the Southern Zone flag-off last Tuesday.

Surgeries have continued to be performed on those seriously injured. But the rest are stable and recovering well.

At the Mangu Cottage hospital, many families have continued to claim corpses of their members and have performed funeral rites.”