243 soldiers seek to resign from service 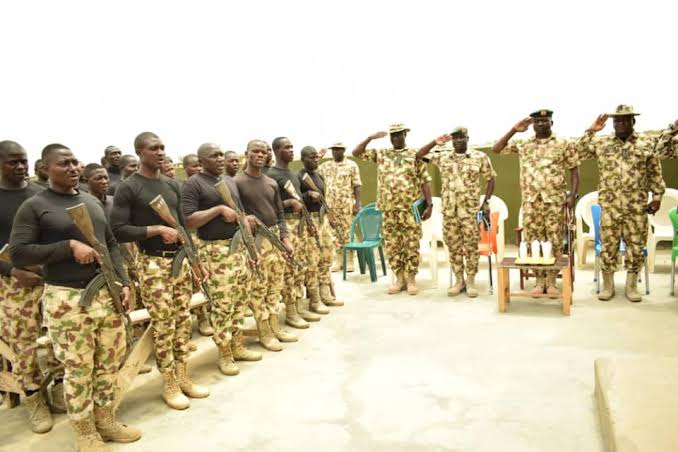 The chief of army staff has approved the resignation letter of 243 soldiers who have been in the northeast and other theatres of operation.

The soldiers directed their letters to Lt General Faruk Yahaya, for voluntary retirement.

This action comes amid worsening security challenges the military is currently combating in most parts of the country.

The soldiers, drawn from various formations of the army across the country, are all junior cadres who are mostly fighting against terrorists and insurgents.

The list of the exiting soldiers did not distinguish between those embarking on voluntary retirement and those leaving the army on medical grounds.

However, none of them had neither attained retirement age nor the mandatory years of service.

Some of the affected soldiers gave reasons such as loss of interest, intimidation by superiors, corruption in the army, and low morale as their reasons for resignation.

The soldiers in a letter to the army chief under Reference NA/COAS/001, quoted the Harmonised Terms and Conditions of Service soldiers/rating/airmen (Revised) 2017.

The approval of their voluntary disengagement dated August 15 was signed by Colonel S.S. Ahmed.

Writing on behalf of Yahaya, in the document, Colonel Ahmed said, “In compliance with the provisions of Reference A, the COAS vide Reference B has approved the voluntary and medical discharge of the above-named WO, and 242 others listed as Annex A.

“The soldiers are to proceed on terminal leave WEF 15, January 23, while their disengagement date takes effect from 15 February 23 in accordance with the Nigerian Army administrative policy and procedures No 27 paragraphs 3 and 4.

“Accordingly, I am directed to request formations and units to release all affected soldiers to report at the Headquarters, Garrison, with their unit service documents for documentation.

“All forms of military-controlled items, arms, ammunition, and items of combat kits are recovered from the soldiers prior to their disengagement date and certified that they are properly de-kitted. Please acknowledge.”

In another development, there have been allegations of corruption in the Nigerian Army which some of the soldiers have blamed on the issue – soldiers overstaying in the North-East.

According to some soldiers, the army is the epitome of deep-seated corruption. They noted that the corruption is affecting the prosecution of the anti-terrorism war in the North-East.

Recently, army personnel deployed for counterinsurgency operations in Borno State lamented that those who were to relieve them three months after they were asked to leave the battlefield had yet to resume.

The soldiers complained that they were being forced to confront Boko Haram militants, adding that their low morale and lack of willingness to continue to fight made it possible for terrorists to dislodge some military camps recently.

They complained of abandonment and accused the military authorities of keeping them on the war front beyond their approved period of stay.