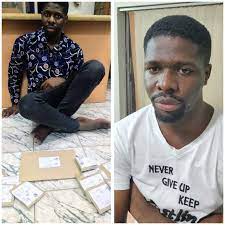 A 34-year-old Nigerian kingpin of a drug cartel, Babashola Titus Odumosu has been arrested by Indian Anti-Narcotics Cell, Dwarka District.

In a statement on Tuesday, the Commissioner of Police, Dwarka District, New Delhi, M. Harsha Vardhan, IPS DY, said the Nigerian drug trafficker was arrested with his Indian collaborator, who is an event organiser.

According to the statement, Babashola was earlier arrested in 2008 when he came to India on a tourist visa and joined some cheating rackets in South Delhi. He was subsequently declared an offender in a cheating case of PS Vasant Vihar.

The police commissioner narrated that the Nigerian drug trafficker engaged an Indian event organiser, one Aman Singh with $5,000 in drug trafficking when he came to solicit financial help from him and his co-drug trafficker, one John.

“As directed by Worthy DCP/Dwarka, to curb the illicit drug trafficking in Dwarka District, the team of Anti-Narcotics Cell Dwarka is motivated and sensitized to develop intelligence and information, regarding drug traffickers in Dwarka.

“On 28/07/2022, HC Dinesh received secret information, regarding one person namely Aman, who is indulged in drug trafficking. As per information, the team reached Jeevan Park, Uttam Nagar, Delhi and a trap was laid down and the team took their position.

“On seeing the police team, suspect person tried to flee from the spot but with the sincere efforts of the team, he was apprehended.

“During his search polythene containing a white substance was recovered from his possession which upon checking found Cocaine, weighing 10.7 gm.

“On sustained interrogation, the accused disclosed that he got into the contact of Nigerian Kingpins namely Babashola & John and he used to organise parties and events.

“Accused Aman got huge debts in his business. He approached his Nigerian friends for financial help. On which one John friend of Babashola offered him to bring a consignment of cocaine drug from Dubai and he will give 5000 dollars for this.

“Accused person accepted his offer and went to Dubai in the month of June, and brought 2.5 kg cocaine from Dubai.

“Thereafter both the accused persons got underground and the accused Babashola fled to Bangalore. Raids were conducted at the address of Babashola where copies of his two passports were found.”

The Police Commissioner further stated that efforts were made by the team to nab the Nigerian national.

“Team was regularly tracking the movement of Babashola as he was planning to flee from India on the basis of fake passport.

“Finally, he was tracked down and detained at Mumbai airport, while he was travelling by fake passport. Original and fake passports were recovered from his possession.

“Accused Babashola disclosed that he came to India first time in 2008 on a tourist Visa and joined some cheating rackets in South Delhi being run by African nationals.

“During this period, he was arrested by PS Vasant Vihar in a cheating case and he was declared PO in that case. Second time he came to India via Nepal and started residing in Chander Vihar.

“Both the accused persons are in Police Custody and raids are being conducted to trace John and other members of the syndicate and the remaining consignment of Cocaine,” the statement added.