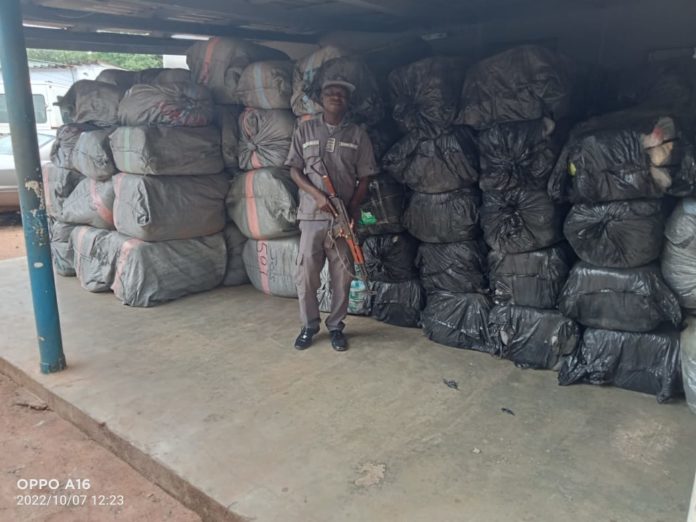 A total of 11, 358 bags of foreign parboiled rice imported into the country between July and September 2022 has been intercepted by the Ogun Area 1 Command of Nigeria Customs Service (NCS).

This is in addition to the seizure of 1, 550 units of disused tyres, as well as 180 bales of secondhand clothing evacuated from a warehouse situated along the Lagos – Ibadan expressway in Ogun State by the command’s anti-smuggling operatives who acted on intelligence for the operation within the period under review.

The command’s Area Controller, Comptroller Bamidele Makinde disclosed this while briefing newsmen in Idiroko in Ipokia Local Government Area of Ogun State on the activities of his command for the 3rd quarter of 2022.

According to him, the seized 11, 358 bags of foreign parboiled rice, each weighing 50 kilograms represented about 38 trailer trucks load. The total Duty Payable Value (DPV) of the contraband seized was over N341 million, with the sum of over N38. 5 million being an amount generated as revenue for the 3rd quarter of the year.

Makinde, who expressed satisfaction in what he described as a reduction in the smuggling activities in the command during the past nine months, attributed the feat recorded by NSC to a successful stakeholders’ engagement and spirit of patriotism deployed by the NCS personnel in the discharge of their duties for the economic development and security of the country.

“We were able to achieve this feat with the effective use of intelligence. Recalcitrant smugglers should, therefore, note that the command, through shrewd, intensive and choking anti-smuggling activities, driven by effective employment of timeous intelligence is all out for them”.

“It is important to note that activities embarked upon by the command are driven by patriotism for the economic development and security of the nation. Nigeria Customs Service operatives, mindful of the rules of engagement, will continue to carry out their legitimate duties as prescribed by the law”.

Giving a breakdown of the other contrabands, Bamidele said the 227 seizure included 67, 650 liters of smuggled Petroleum Motor Spirit (PMS) popularly referred to as petrol, packed in 2, 706 kegs; 20 wraps of weeds suspected to be Indian Hemp (cannabis sativa), as well as 80 kegs of vegetable oil, packed in 25-litre size jerrican among others.