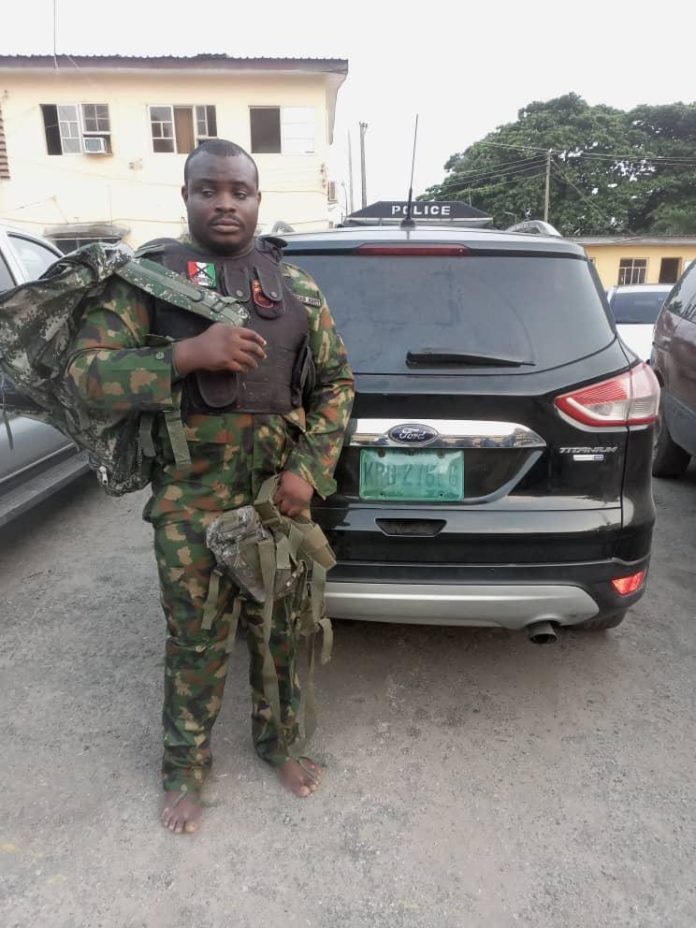 Andy Teddy Edwards was arrested following a painstaking investigation that was launched after one of his victims reported the robbery of her Lexus RX330 SUV.

NigeriaCrime.com learned that Edwards acts as a modeling agent, lures ladies for auditioning, and then robs them of their cars and valuables at gunpoint.

Hundeyin stated that while the investigation is being rounded off, the owner of the Ford SUV is hereby urged to come forward to claim same. The suspect would be arraigned after investigation.”

In a related development a 39-year-old fake soldier, Oluwatosin Gabriel, and an illegal supplier of military uniforms, Nurudeen Agboola have been arrested.

Oluwatosin was nabbed during the enforcement of the total ban on motorcycles in some parts of the state. While a discreet investigation by the detectives led to the arrest 35 years old Nurudeen Agboola.

Some of the items recovered from the fake soldier and his supplier include four pairs of military camouflage uniforms, nine live cartridges, military identity cards, police accouterments, and charms.

An investigation is ongoing to establish the extent of their criminality.

Meanwhile, the Lagos State Commissioner of Police, CP Abiodun Alabi, once again assures the good people of Lagos State of the unwavering commitment of officers and men of the Command towards the annihilation of crime and criminality in the state.