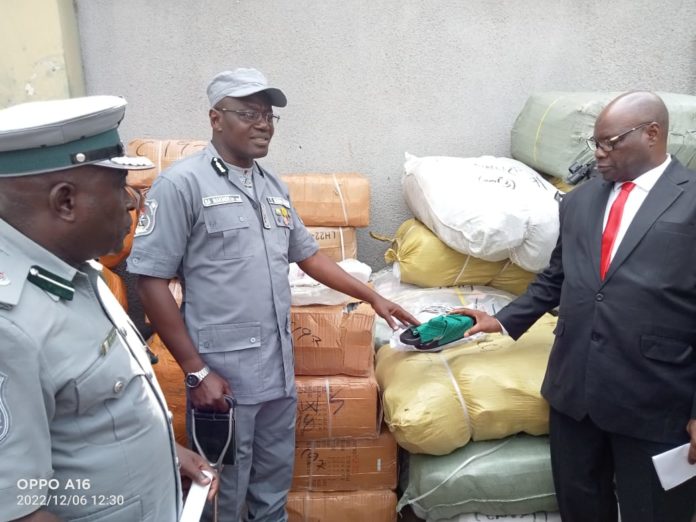 The Ogun Area 1 Command of Nigeria Customs Service (NCS) on Tuesday, said it has intercepted a total number of 44, 933 bags of foreign parboiled rice illegally imported into the country from the neighbouring Republic of Benin.

NigeriaCrime.com learned that the foreign parboiled rice, an equivalent of 73 trucks of 50kg each, was intercepted along with other contrabands, which an overall Duty Payable Value (DPV) worth over N4. 886 billion in a total number of 842 seizures.

According to the command’s Comptroller, Controller Bamidele Makinde, who disclosed Idiroko, Ipokia local government area of the state, the foreign parboiled rice, an equivalent of 73 trucks of 50kg each, was intercepted along with other contrabands, which overall Duty Payable Value (DPV) worth over N4. 886 billion in a total number of 842 seizures carried out by his command within the period under review.

The Controller also disclosed that the NCS Ogun Area 1 Command was able to generate a total sum of over N58. 676 Million as revenue since April 2022 when the federal government gave the directive for the reopening of the Idiroko border till date.

He explained that the revenue generated accrued from the auction and sales of perishable and other highly combustible items such as the Premium Motor Spirit (PMS) being smuggled out of Nigeria, but intercepted by operatives of the command.

Makinde further disclosed that his command was able to achieve the feat through collaborative efforts of the traditional rulers in border communities, and sister security agencies, as well as through an “intensive round-the-clock surveillance and patrol” but not without its attendant collateral damages to the officers and men of the command.

“It is important to note that activities embarked upon by the command were patriotic-driven and in the interest of the economic development and national security of Nigeria”.

Makinde gave the nitty-gritty of other contrabands intercepted to include: 16, 224 kegs of petroleum; 3, 629 units of disused tyres; 41 sacks with 940 wraps of weeds suspected to be Indian Hemp; 2, 250 packets of Tramadol; 89 bales of foreign textile, several cartons of foreign wine; 170 cartons of poultry products among other.

While emphasizing that economic and other commercial activities have improved at the border communities in the State since the reopening of the border till date, Makinde however, declared that NCS operatives will not be deterred by the magnitude of attacks on its personnel, but continue to discharge their constitutional responsibilities as prescribed by the laws.