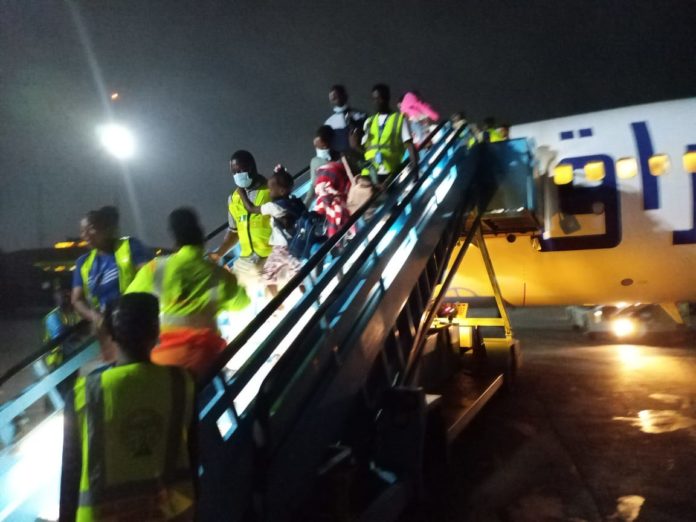 Barely a week after 143 stranded Nigerian returnees from Libya, a new set of 175 returnees arrived Nigeria from Libya in the late hours of Tuesday.

The Returnees arrived the Cargo Wing of the Murtala Muhammed International Airport, Ikeja aboard Boeing 737-800 Al Buraq Air with registration number 5A-DMG
which landed at the airport at about 11.50pm under light rain drops.

After profiling and documentation of the Returnees, their revealed that the 64 female adults, 12 female children and five infant females making a total of 81 females.

The return journey was facilitated by the International Organisation for Migration, IOM, with funding from European Union.

Also, the profiling indicated that 77 male adults, 11 male children and 6 infant males making a total of 94 males including four medical cases; two females and two males were returned to the country.

He was represented by the Lagos Territorial Office, Coordinator, Ibrahim Farinloye.

Other agencies at the airport alongside NEMA were Federal Airport Authority Nigeria, FAAN, National Agency for the Prohibition of Trafficking in Persons, NAPTIP, Refugee Commission and the Nigeria Police.

“The profile of the individuals consists of 96 male adults, eight boys are eight, and one male toddler. We had a total of 36 female adults, a girl, and a female toddler.

Among them are a female and a male adult with serious medical issues.” Meanwhile, the coordinator did not disclose the nature of their sickness.

They were also received by the National Emergency Management Agency of Nigeria, NEMA, an agency set up by the Federal Government, responsible for tackling disaster-related issues through the establishment of concrete structures and measures.
Nigeriacrime.com