A Christ Embassy pastor and his wife have been declared wanted by the Economic and Financial Crimes Commission (EFCC).

Pastor Bribena, who is a pastor at Christ Embassy Kumasi 1, Ghana, fled Nigeria last year after failing to pay investors their return on investment (ROI), leading to protests in Yenagoa, the Bayelsa State capital.

Pastor Bribena had alleged that some staff of the cooperative compromised its systems by defrauding the organisation of over N300million, adding that the organisation was carrying out a forensic audit to enable it pay backlog of unpaid surpluses to the investors and members, a promise that was never fulfilled.

The Bribenas are the promoters of Baraza Multipurpose Cooperative Society Limited.

He is accused of scamming thousands of billions of naira after promising a 25 percent Return on Investment (ROI) monthly.

In 2021, the victims repeatedly visited the company’s headquarters on Otiotio Road in Yenagoa to seek a refund. The EFCC has sealed the building.

The company also has branches in Port-Harcourt, the Rivers capital, and some other parts of the country.

Last July, Bribena released a video to debunk speculations that his health and business were failing.

“Ignore such news. If I did not faint since, is it now that I will faint? I don’t know whether some people are angry that Baraza could bounce back”, he said. 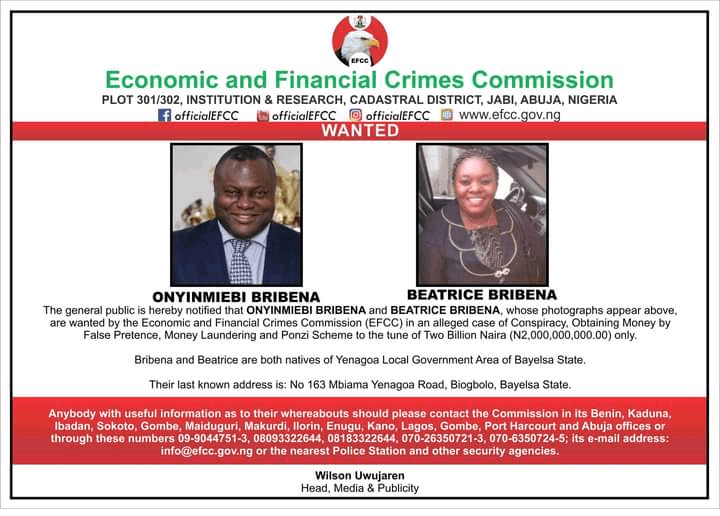 “Bribena and Beatrice are both natives of Yenagoa Local Government Area of Bayelsa State.