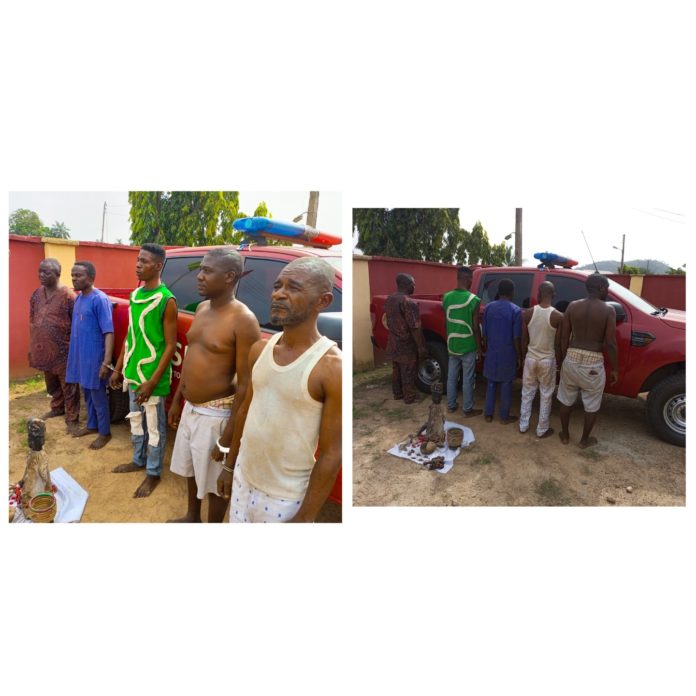 Confirming the development, the Commandant of the outfit, Brigadier-General Joe Komolafe said the suspects have been indicted in many frauds that took place in the area.

Explaining how they dupe their victims, the Commandant said, ”Their modus operandi is that they will call you, tell you they have seen vision for you for your life to be ok, go and bring this, go and bring that. They dupe people to the extent that the victims are threatened that they would lose every member of their family.

“How did it start? My colleague in Ogun State put a call to me that one of the people staying in Abeokuta, in Ogun State was duped to the tune of about N2.5m or thereabout by some group in Ikere-Ekiti, Ekiti State, threatening to kill him, that I should please assist.”

He continued that his men started to trace the alleged fraudsters at Ikere-Ekiti, and God gave them success.

Speaking further, Komolafe said, “Here we are, five of them were arrested in their shrines at Ikere. We were able to destroy part of the shrines, and brought some to our office.

“We are engaged in thorough investigation to get more of such suspects. These are not the only people, they are just a fraction of the people we are looking for in the State. There was a time we went to Atikankan to arrest some of them.”

The Commandant said the hunt for such unscrupulous elements in different parts of the State is a continuous affair, adding that the Command is not going to stop because those involved in the nefarious act are more than those already in the net.

“This is just a location, I know there are other shrines in Ikere. We will be there,” he stated.

The forty-year-old victim, Udany James, who said he is an indigene of Benue State, but resides in Ogun State, where he is engaged in farming, told journalists that the suspects hoodwinked him by calling him on phone that they were spiritualists and by their visions he should reach out to them for prayer.

He claimed that in the process of interacting with the culprits through phone while in Ogun State, he was defrauded of N2.5m which he was remitting to them through POS.

Asked how they got his phone number to establish contact with him in their illicit deal, Mr James expressed surprise, claiming not to know.

But in the explanation of the victim, luck ran against the suspects when he came from Ogun State to Ikere-Ekiti, and through the efforts of Amotekun officials, they were able to locate their base.

He said it was when they got there, he found out they were not spiritualists but those who employ fetish means to defraud people.