Four narrowly escapes being lynched by angry mob in Lagos 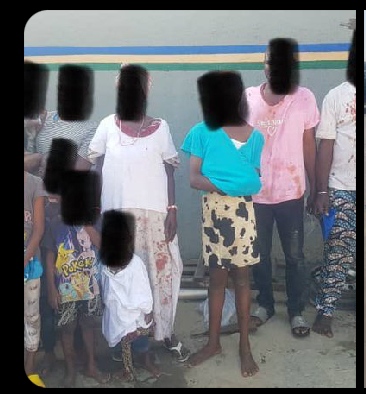 Four persons including an elderly woman were almost lynched by an irate mob on Wednesday evening at Eko Bridge, Lagos Island after they were alleged to have kidnapped twelve children, found inside their vehicle.

The four suspects were beaten thoroughly by the mob who alleged they had kidnapped the twelve children aged between seven months to 12 years old.

All pleas by the suspects that the children in their custody were their children and grandchildren; and they were all coming from the beach where they went to do some sacrifices fell on deaf ears.

It was gathered that the mob burnt the vehicle conveying the suspects and the children to their destination before the arrival of the police.
They were, however, saved by policemen attached to Ebute-Ero Division and the Rapid Response Squad who arrived at the scene on time to rescue the adults from lynching.

According to eyewitness Adesina, “I witness the scene on my way back from work. I saw people gathered, so I stopped by to know what was happening. I asked one of the onlookers what was the woman’s offence, she said they kidnapped some young children. Luckily police arrived at the nick of time to rescue the suspects from the mob who were bailing for blood.”

The victims according to the Lagos State Police spokesperson, Benjamin Hundeyin, narrowly escape jungle justice. Four adults (including one grandmother) were beaten black and blue after they were suspected of being kidnappers because they had with them in their vehicle twelve children (ranging from 7 months to 12 years old).”

“Police officers from Ebute-Ero Division and the RRS were on time to rescue the adults from lynching. Their vehicle was totally burnt down by the mob. Preliminary investigation shows that they were all coming from the beach where they allegedly went to do some sacrifices. The adults also explained that the children were their children and grandchildren.”

“Meanwhile the case has been transferred to the State Criminal Investigation Department Yaba Panti for further investigations.

Recall that on June 9th, a motorcyclist along the Jakande Estate/Isheri Road was almost lynched by a mob after he reportedly hit a pedestrian who died on the spot.

The motorcyclist allegedly veered off the road and hit the yet-to-be-identified person.

Unfortunately, the pedestrian died on the spot attracting the anger of passers-by who decided to lynch the rider.

The rider was, also saved by police officers who took him to the hospital for treatment. The deceased person was also evacuated by the police.

Hundeyin reiterated the stance of the Command against jungle justice, adding that anyone found engaging in such would be dealt with in accordance with the law.