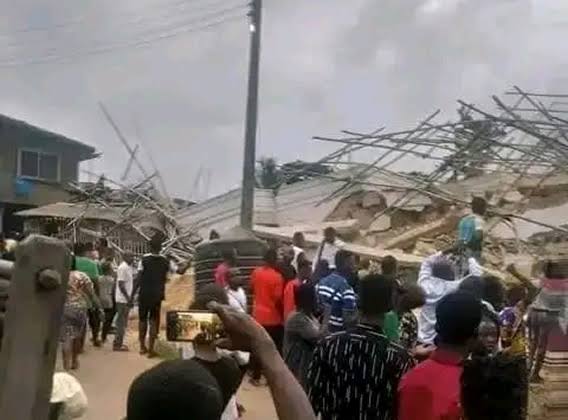 Building collapses in Uyo: Two persons have been confimed dead while others injured in a four-storey building which collapsed in Uyo, the Akwa Ibom capital.

The incident happened on Saturday at Iman street, off Aka road in Uyo.

According to witnesses at the scene of the incident, the building was under construction, and work was ongoing on the fourth floor when the structure collapsed.

As at yesterday, four persons were said to have been rescued, while security operatives and rescue workers cane to the site.

Responding  to the incident on Sunday, Akwa Ibom State Government  promised to investigate the remote and immediate cause of a four-storey building that collapsed

Moses Ekpo, the deputy governor who also visited the scene on behalf of the governor,  Udom Emmanuel, commiserated with the families of deceased victims and promised that the government would investigate the matter and ensure that those found culpable are brought to book.

Ekpo, also led other government functionaries including the security chiefs, to check on the relatives of the deceased, and other victims.

“The governor is out of Uyo and he sends his condolences. I came here first and foremost to sympathise with the families of those who lost their loved ones and since I came this is the question I have been asking, ‘where are the relations?,

“We must also investigate why and how it happened, to ascertain the personalities that are involved, was the building approved? If yes, did they follow the specification? It is after the inquiry that the state government would know what to do, but like I said earlier, whoever violates the building regulations, the law must take its course.”