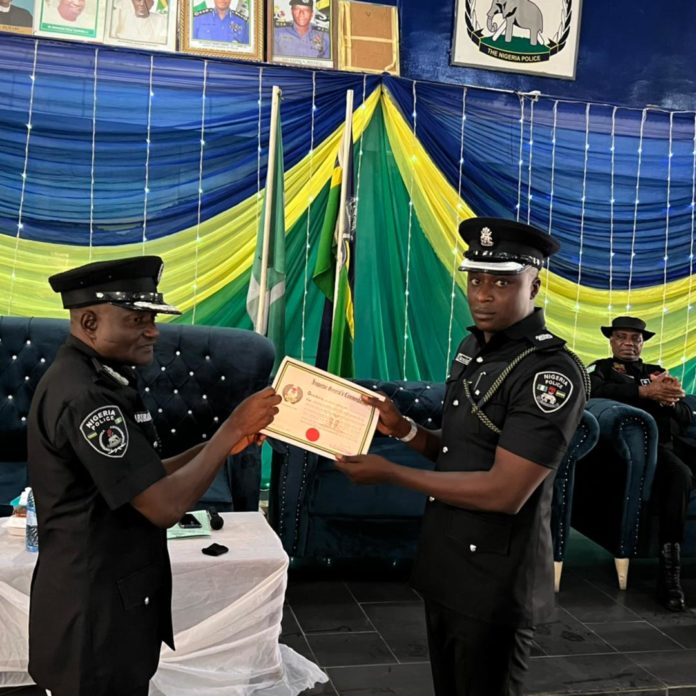 SP Daniel Itse Amah has received an award of commendation from the Inspector General of Police, Usman Baba for rejecting a Two hundred thousand Dollars bribe by armed robbery suspects.

SP Amah was showered with praises and commendations by DCP Abubakar Zubair on Monday while handing over the award on behalf of the IGP in Kano.

Earlier, SP Amah led to the arrest and prosecution of one Ali Zaki and some Police Officers, in a case of Armed Robbery involving the sum of Three hundred and twenty million five hundred thousand Naira. (N320,500:00)

SP Amah was offered about One Hundred Million Naira by the principal suspect in an attempt to cover up the crime but he refused the offer.

The IGP who was impressed by the outstanding performance awarded SP Amah for exhibiting sound professionalism and excellent work ethics.

“He is awarded for exhibiting sound professionalism leading to the arrest and prosecution of one Ali Zaki and some police officers in a case of an armed robbery involving the sum of three hundred and twenty million five hundred thousand Naira only as well as rejecting the sum of two hundred thousand United States Dollars (USD 200,000) offered to him as a bribe” the IGP stated.

Recall that while SP Daniel Itse Amah has received an award of commendation from the Inspector General of Police, Usman Baba some officers have been disgraced from the police force.

Corporal Opeyemi Kadiri with No. 509745 attached to Dolphin Divisional Headquarters, Lagos Police Command was dismissed for gross misconduct, disobedience to lawful order, and assault on a member of the public captured in a viral video on August 3, 2022.

PC Liyomo Okoi, with force No. 524503 over gross misconduct captured in a viral video. The video, which trended on social media platforms recently, captured the dismissed officer flogging a man with a machete.

Richard Gele, a police inspector, was captured in a video justifying extortion. In a video that went viral recently, the officer was seen addressing explaining why there he had no issue with extortion.