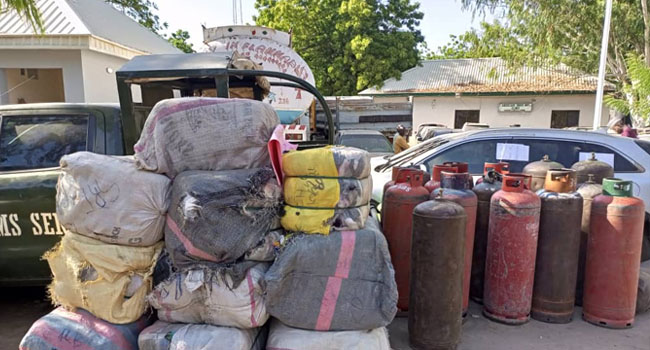 Eight assorted vehicles and general goods with a duty paid value of ₦77,803,825 have been intercepted by the Katsina State Area Command of the Nigeria Customs Service between September and October 2022, the service revealed.

This was disclosed by the Customs Comptroller in charge of Katsina State Command, Dalha Wada Chedi, who said the total duty paid value of the seized vehicles stands at ₦59,575,000.00 whereas, that of the general goods stands at ₦18,228,825.00 respectively.

Earlier in the week, Chedi displayed some of the items seized by the Command within the period under review at the Command Headquarters, Katsina.

He noted that duties are collected on food items coming to Nigeria through the Jibia border such as beans, tiger nuts, dates, and groundnuts among other lawful items.

“We have the sample documents of those who have paid into the Federation Accounts on those products for you to verify. Any duty paid to Customs goes directly into the Federal Government Account called ‘TSA’.

“In our effort to facilitate trade, an agreement was reached with the Associations of Tiger Nuts and Palm Dates to issue their Union receipts to those that bought and load their goods from their markets to enable them present at any patrol checkpoints, they come across.

“So, the same agreement has been reached with the Associations of Beans, Groundnuts, and Sesame at Jibia, Dankama, Kaita, and Kagadama markets. You may wish to verify from them not the Groundnut Cake Retailer that was used to attract people’s sympathy.

“I assure the good people of Katsina State business community that we are professional and we will not relent in discharging our mandates, all those mischief makers should allow peace to reign or face prosecution when caught smuggling because we have intensified our strategies on arresting any smuggler.

“We are calling on those mischievous people to stop misleading the public or face the wrath of the law.

“The security heads in Katsina State have formed an ADHOC committee to go around the state to fish out all the bad eggs within the security agencies such as; illegal checkpoints, extortion, and use of camp boys in discharging official duties.

“You could remember for over a year now we have had a smooth Customs operations in Katsina; this is just a litmus test of our success.

“We are not unaware of this particular period we are in as the election is fast approaching and campaigns are on high momentum some politicians may try to
impress their voters through any means,” he said.