The Nollywood Actors identified as Cynthia Okereke and Clemson Cornel aka (Agbogidi) reportedly went missing after their family members confirmed they didn’t come back from a film Location at Ozalla Town, Enugu state.

The duo who are members of the Actors Guild of Nigeria are alleged to have been kidnapped and this has increased fear amongst members about the safety of Actors filming in the country.

Confirming the sad development, in a press statement signed by Monalisa Chinda Coker, Director of Communications Actors Guild of Nigeria, the National President of the Association Ejezie Emeka Rollas advised all Actors to avoid going to the outskirt of cities to film except under full security cover is provided to ensure their safety.”

Shocked by this ugly incident Emeka Rollas, urged the security agencies to speed up investigations that would lead to
their safe rescue.

He equally appeals to all members to pray for the safe return of the thespians.

Parts of the statement stated that “Actors Guild of Nigeria, Cynthia Okereke, and Clemson Cornel aka (Agbogidi) were reported missing after their family members confirmed they didn’t come back from a film Location at Ozalla Town, Enugu state.”

“The two members were suspected to have been kidnapped and this has increased fear amongst members about the safety of Actors filming in the country.”

Cynthia doubles as a producer and she has worked with almost all the big names in Nollywood from Patience Ozokwo to Pete Edochie. She had her big break in 2003, when she starred in the Nollywood blockbuster movie titled “Osuofia in London”. Behind the scenes, she is a very lovely mother and wife to her family and close associates who are close to her.

Nollywood acts have been victims of kidnapping in Nigeria in the past.

In June 2021, a Nollywood actor, Pressing Forward, was kidnapped in Imo State.

He was later released from captivity, after which his fans rallied around him in jubilation.

In 2009 veteran actor, Pete Edochie, was kidnapped and released after paying a ransom.

Nkem Owoh was abducted and released after paying a ₦1.4 million ransom.

The actor, popularly known as ‘Osuofia’, was kidnapped as he travelled along Enugu – Port Harcourt expressway. 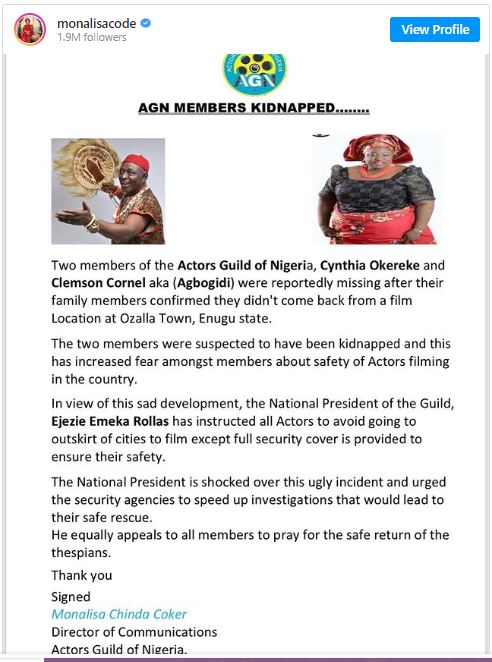