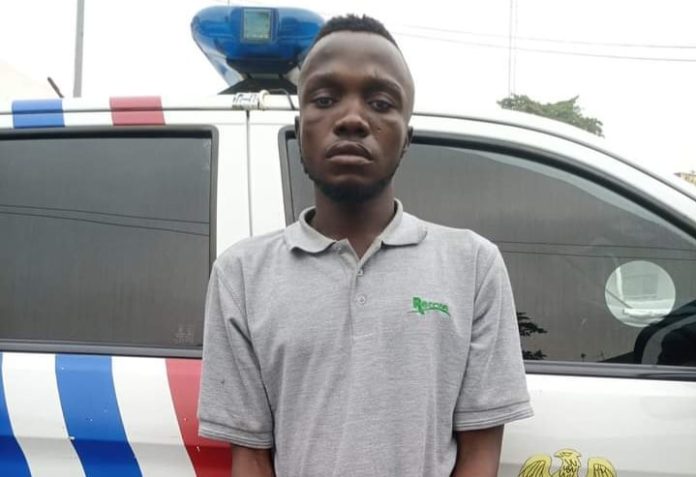 A phone thief, Chinedu Ike, has been arrested by the Rapid Response Squad (RRS) of the Lagos State Police Command weeks after he was rescued by angry mobs who wanted to lynch him.

This is contained in its official Twitter handle on Wednesday.

NIGERIACRIME gathered that the suspect, aged 25, had escaped death by a whisker when a patrol team of the police Command saved him from jungle justice.

According to reports, an angry mobs pounced on the suspect at the Iyana Oworo area of the state after he was caught stealing a phone in September, 2022.

He was beaten to coma before he was rushed to the hospital by the police and discharged days later.

A statement by the RRS said on Monday, he sneaked into a car and stole a driver’s phone again at Iyana Oworo but he ran out of luck once again.

Ike was arrested after those who knew him hinted the owner to look for the mobile device.

The police eventually recovered an Infinix Note 10 from Ike’s bag after a search. He’s now in detention.

Meanwhile, a 50-year-old man, Adewale Gbenga, has been arraigned before the Yaba Magistrates’ Court, Lagos, for allegedly robbing people at the University of Lagos, in the Akoka area of the state.

The prosecutor, Godwin Oriabure, said the defendant had been stealing in the varsity for the past three years, adding that the offence was contrary to Section 280 (1a) and punishable under Section 287(1) of the Criminal Law of Lagos State, 2015.

The defendant pleaded not guilty to the charges.

Magistrate A.O Salawu granted the defendant bail in the sum of N200,000 with two responsible sureties and adjourned the matter till January 26, 2023 for mention.