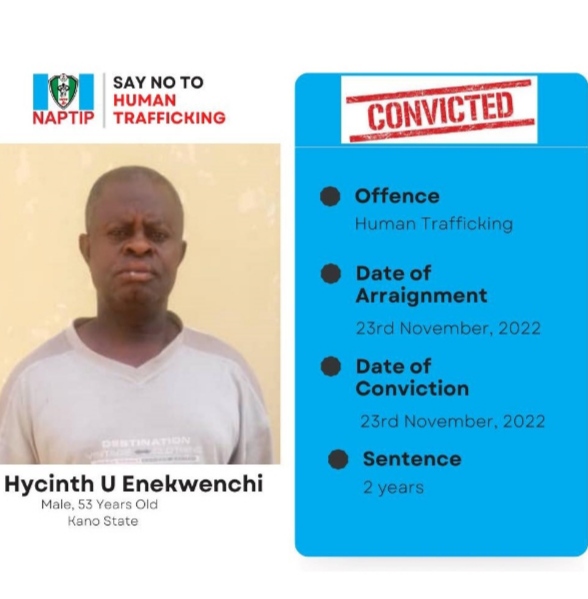 A Kano State high court has sentenced a 53-year-old man, Hycinth Uchechukwu Enekwechi to two years imprisonment for attempting to procure the illegal entry of three girls from Oyo and Osun to Libya through Niger Republic.

The National Agency for the Prohibition of Trafficking in Persons (NAPTIP) disclosed this on Thursday, November 24, 2022.

“The convict, a 53years old Male of No. 59 Abeokuta Road, Sabon Gari Quarters, Kano State was sentenced to 2 years imprisonment with an additional fine of N250,000 for attempting to procure the illegal entry of 3 Females to go from Oyo and Osun State respectively to Libya through Niger Republic.”

Recall that last month in Ogun State, a couple, Godday and Ebere Samuel were arrested for alleged human trafficking.

The couple was accused of trafficking a 16-year-old girl to Burkina Faso before the trip was foiled.

The Police Public Relations Officer in the state, SP Abimbola Oyeyemi said the suspects were arrested following a report lodged at Atan-Ota divisional headquarters by one Adeniji Okikiolu that his 16-year-old daughter, Maria Adeniji suddenly disappeared from home on the 16th of October 2022, and while a search party was organised to look for her, he was informed by someone that the missing girl was seen with Ebere Samuel on the previous day.