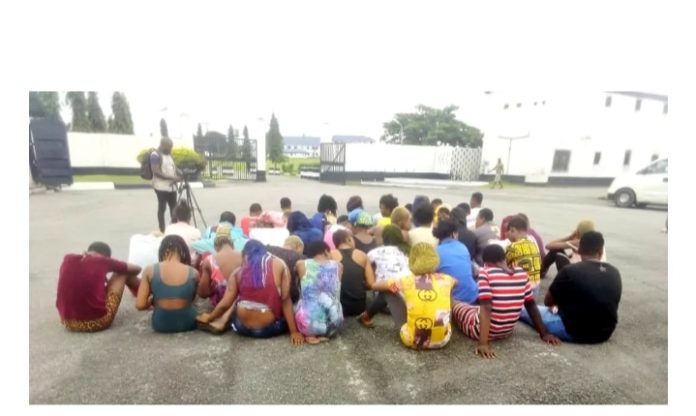 Three suspects specialised in trafficking teenagers for sexual exploitation have been arrested by the Nigerian Navy.

NigeriaCrime.com gathered that the operation was carried out in collaboration with the Nigeria Agency for the Prohibition of Trafficking in Persons, NAPTIP and Nigeria Security and Civil Defence Corps, NSCDC.

According to Lieutenant Commander Richard Iginla, Base Information Officer, Nigerian Navy Ship (NNS) Pathfinder, the 50 prostitutes, mainly teenage girls were rescued in the early hours of Saturday after a tip-off from NAPTIP.

We got the intelligence from NAPTIP, who had been tracking the brothels that camped juveniles with some of them as young as 14 years of age,” he said

So, after NAPTIP shared intelligence with us, a joint team was set up and we immediately went into action to rescue the victims.

“Children are gifts from God, and we must do everything humanly possible to protect them from all forms of abuse and exploitation. The Nigeria Navy will continue to collaborate with relevant agencies to bring to justice criminal elements that traffic persons either on land or through the waterways.”

“On conclusion of our investigation, the suspects and victims will be handed over to NAPTIP for further investigation and possible prosecution,” he added.

The head of NAPTIP in Rivers, Nwa-amaka Ikediashi, said the agency would immediately rehabilitate the victims with a focus on reintegrating them back into society.

According to her, the victims, mainly under-aged girls, would also partake in different phases of counselling, to ensure they don’t continue prostitution.

“NAPTIP, as the focal agency mandated to fight all forms of human trafficking and sexual exploitation, will conduct a proper investigation, to ensure justice is served.