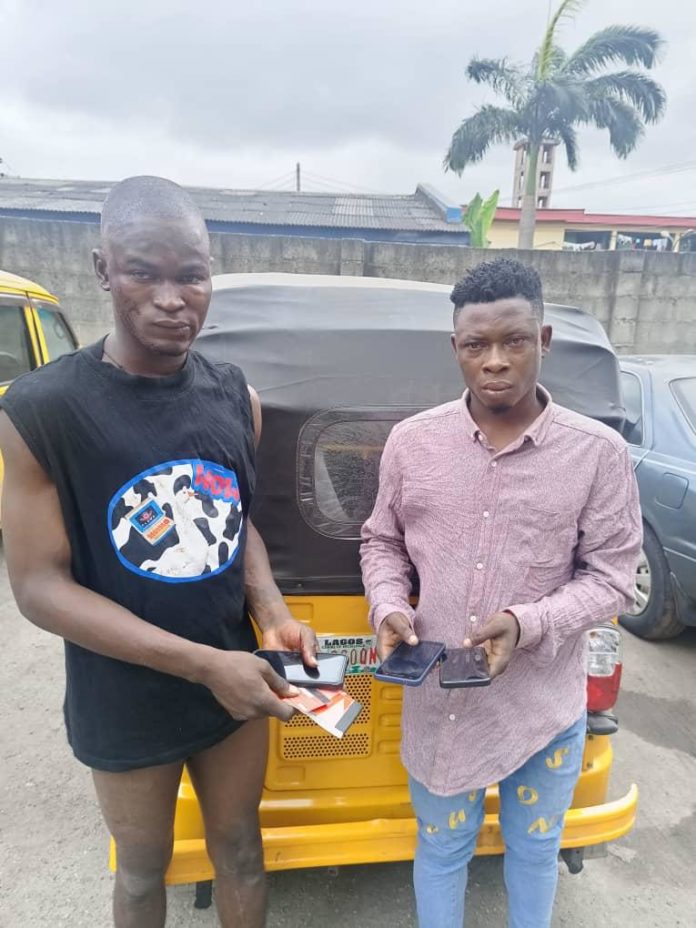 Two members of a notorious one-chance gang terror rising motorists within Funsho Williams Avenue area of Lagos state and its environs have met their waterloo.

The suspects identified as Usman Hussani, 21, and Ebuka Ukechukwu,25, were arrested by police operatives attached Surulere Division, Lagos State Police command following a distress call received from a victim shortly after he was dispossessed of his phone and other valuables.

NigeriaCrime.com learned that some of the items recovered from the suspects include; two mobile phones, two SIM cards, one Sterling Bank ATM card, and one UBA cheque booklet belonging to Ugochukwu (other names withheld) and one brand new tricycle with registration number LSD 360 QN used by the gang.

In a related development, the pastor of Truth and Spirit Prophetic Church, Mercy Okocha, and nine of her members have been arrested over the death of a 25-year-old man Oro worshiper Agboola Akeem at Sanni Taiwo Lawal Street Oko Oba area of Lagos.

The suspects were arrested after Akeem was attacked and killed during a clash between members of a Pentecostal Church and traditional Oro worshipers.

However, trouble started when the Oro worshippers who were performing their night festival at Oko Oba ordered members of the church who were also holding a vigil to end their service.

An order which was fiercely resisted by members of the Church.

Unfortunately, the disagreement degenerated into a crisis that led to the stoning of Akeem to death.

Sequel to Akeem’s death some irritate youth in the community went berserk attempting to set the church ablaze.

Confirming the incident, the spokesperson of Lagos State Police Command SP Benjamin Hundeyin said about 6:30 am the divisional police station in Oko Oba received a distress call that a church, Truth and spirit prophetic church located at 2 Sanni Taiwo Lawal Street in Oko Oba was about to be set ablaze by some irritate youth in the community.

“Based on the distress call, a team of police officers was mobilised to the scene.” Hundeyin explained that on getting to the scene, it was discovered that a group of traditionalists was performing their Oro sacrament in the area while the church members were having vigil.

The Oro worshippers instructed the church members to stop their service as pandemonium ensured resulting in the death of Agboola Akeem.
The corpse of the deceased has been evacuated to a public morgue for autopsy.”

While the pastor, Mercy Okocha, and nine other members of the church have been arrested. Investigation is still in progress.”