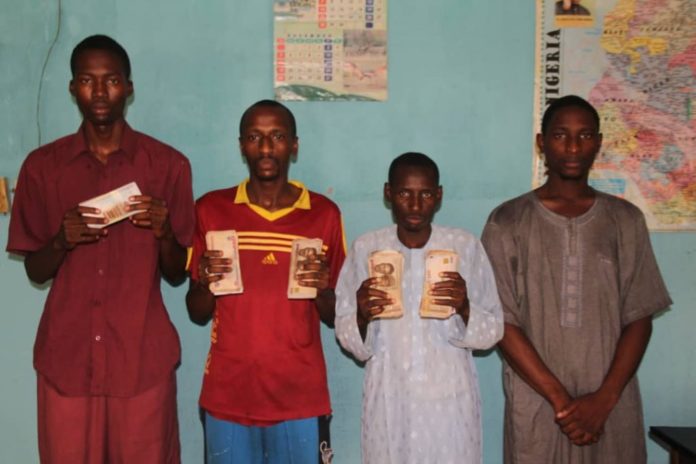 “On September 6, at about 1630hrs one Samira Jibrin, female, a next of kin to Jibrin Adamu, male of Zalanga, Ganjuwa LGA, who worked with Bauchi State Ministry of Finance until his death on 02/12/2021, reported that she went to process her father’s benefit at Bauchi Ministry of Finance but discovered that the benefit of her late father had been processed and withdrawn using forged documents by some persons,” the statement reads.

“The detective attached to A’ Divisional Police Headquarters swung into action and carried out a preliminary investigation which revealed that “one Nasiru Samaila ‘m’, aged 48yrs, a staff of Bauchi State Ministry of Finance, conspired with three others namely, Auwal Jibrin ‘m’, aged 27yrs of the ministry of finance Tijjani Mohammad male, aged 27yrs of state low-cost Bauchi.

,“Faruq Mohammad Nasiru male aged 19yrs, an IT student from ATAB Abubakar Tatari Polytechnic attached to the Ministry of Finance on industrial attachment selfishly and mercilessly forged documents and accessed the sum of three hundred and thirty-two thousand N332,000 naira belonging to the deceased and converted it to their personal use, shared the benefit among themselves.”

Investigation revealed that the said Nasiru Samaila who utilised his 17 years experience with the ministry and devised the ill idea of forging documents to claim the deceased’s benefit at the expense of the deserving next of kin, got the sum of two hundred and twelve thousand naira N212,000.00.

Meanwhile, all the suspects confessed to having played an active role in the commission of the crime.

Auwal Jibril, one of thr suspects who is also a serving staff of the said ministry, got the sum of one hundred thousand nairas (N100,000.00) as his share, while Tijjani Mohammed, a cybercafé operator, and Faruq Mohammed an IT student from Abubakar Tatari Ali Polytechnic attached to the said Ministry, ended up with the sum of twenty thousand naira (N20,000.00) respectively.

The sum of three hundred and twenty thousand naira N320,000.00 has been recovered from the suspects.