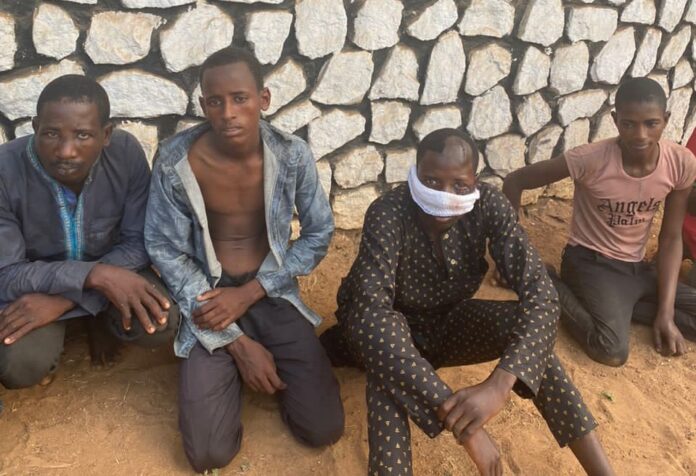 Operatives attached to the Kwara state police command have arrested nine members of a kidnapping syndicate terrorising the state.

NigeriaCrime.com gathered that the operatives also killed three of the suspects during a gun duel.

Speaking of the arrest, the State Commissioner of Police, Mr Paul Odama said the breakthrough occurred weekend in a bush along Balogun area of Bodesadu in Moro local government area of the state, while nine others were arrested at different operations in the state.

Paul Odama said that based on a tip-off, the combined team of vigilantes, local hunters and police officers stormed the bush when suspected kidnappers were about to abduct their targets in the community.

The police commissioner said, “The Divisional Police Officer(DPO) of the area mobilised vigilantes, hunters and policemen, stormed the bush and they engaged the kidnappers.

“During an exchange of gunfire, three of the kidnappers were neutralised while two suspects Lagi Bala and Iliasu Idris were arrested”.

He added that “During the incident, three locally made guns were recovered while the arrested suspects confessed to being kidnappers and cattle rustlers.

“Investigation is ongoing to arrest the remaining members of the kidnapping gang, while the two arrested suspects would be charged to court as soon as investigation is concluded”.

Similarly, the police commissioner, Mr Odama said that the men of the command have arrested another five suspected kidnappers that have been terrorising the people of Eiyenkorin area of the state.

He said that “On 21/1/2023 at about 2 pm, the divisional police officer of Eiyenkorin Division, with vigilante and local hunters in carrying out the directive of the commissioner of police regarding a zero tolerance for kidnapping, stormed the Eyenkorin thick forest to search the hide-outs of kidnappers.

“In the shooting encounter with the suspected kidnappers sighted in the bush, some suspects escaped with bullets injuries, while some were arrested”.

He added, “At about 4 pm of 21/01/2023, information was received that one suspected Fulani man was seen with bullet wounds inside the bush within Eyenkorin, policeman traced and arrested the suspect, during interrogation the suspect confessed to being a member of a kidnapping syndicate that specializes in kidnapping people around Eyenkorin Oko-olowo axis.

“He mentioned one Alhaji Anta now at large as the leader of the gang, other suspects arrested include (1) Buga Ali “M” (2) Suleiman Issah ‘M’ age 20 years (3) Aminu Bello ‘M’ (4) Suleman Biliyah ‘M’ age 21 years (5) Yahaya Adam ‘M’ age 20 years and they will all be charged to court as soon as investigation is over’.

Odama also said, “In another successful operation based on an actionable intelligence that some suspected kidnappers who were believed to be responsible for kidnapping around the axis were sighted

“The police quickly mobilize vigilantes and local hunters and headed to the area.

“Two of the kidnappers by name Yau Alhaji Anta and Idris Alhaji Auta were arrested.

“The suspects confessed to being responsible for the kidnap of the two kidnapped victims in Oluwalose community, Oko-olowo, one Alhaji Tunde Buhari and one Muhammed Mecho.

“When brought together, the victim identified one of the suspects as one of his abductors.

“The suspects would soon be charged to court after investigation”.

“This is to warm would-be criminals of whatever nomenclature that the command is all out to see that they are rounded up and sent to where they belong, Kwara State is a state of harmony, the command would do everything to maintain and sustain the name. “the police Commissioner said.