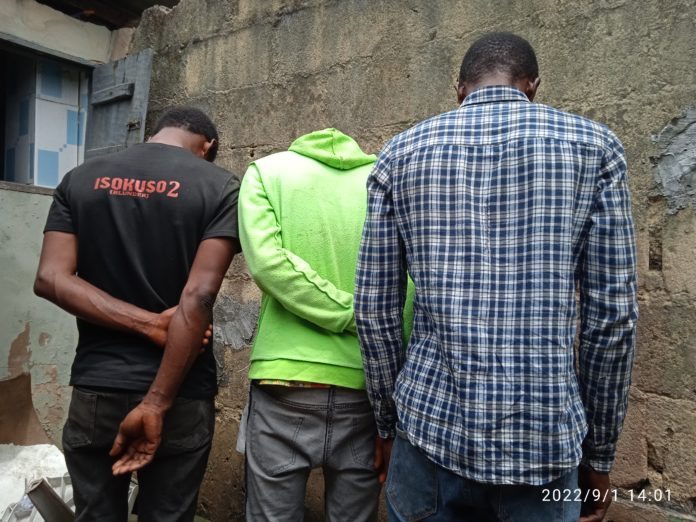 The Lagos State Police Command is currently investigating three suspected interstate robbers, who specialised in stealing vehicles from one state and selling them in another state.

The suspects who are cooling off inside one of the cells at the Police Command for robbery are Sunakmi Adeoye, Kamurudeen Kadiri, and Owoseni Adekunle.

NigeriaCrime.com learned that the trio are members of an interstate robbery syndicate specialised in snatching and selling stolen cars in Lagos, Ondo, and Ogun state.

The three suspects were arrested on August 31 around Berger area in Lagos while trying to sell the metallic grey-coloured Toyota Corolla that they stole in Ondo state. However, the leader of the gang is still at large.

Speaking on how he got involved in the robbery, 27-year-old Owoseni Adekunle said “I started stealing and selling people’s generators. I made between N15, 000 to N20, 000 each time I stole and sold a generator. From there I began to steal and sell Cocoa.”

“I don’t drink, smoke or womanise, I used the proceed I made from petty stealing to feed. I am a tiler but I hardly get jobs.

It was Aro that got me involved in the robbery. He informed me about the operation. He took us to the location because he is familiar with the location in Ondo State. We went for the operation at about 3 am while people were asleep.

When we got to the house, Aro tore the net on the window and used a very long stick to take the car key from a stool where it was placed. The stick has a nail inserted in middle.

Aro gave me the car key after collecting it. I open the vehicle we entered and I drove the car from Akure to Lagos Ibadan road where we waited for the buyer. We were arrested while waiting for the buyer.”

According to Sunakmi Adeoye, who was arrested alongside Kamurudeen Kadiri, aged 30, and Owoseni Adekunle aged 27, “Aro got me involved in the operation after I complained to him that I needed cash to take care of my pregnant wife, and also purchase baby items as my wife will soon deliver.”

He told me we were going for a robbery operation and I agreed to be part of it because he assured me that I will get money from it. I am a photographer but I need help.

Explaining further, Adeoye said it was Aro that introduced me to Kamurudeen and Owoseni. I didn’t know them before the robbery operation. This is our first child; my wife doesn’t know that I have been arrested.”