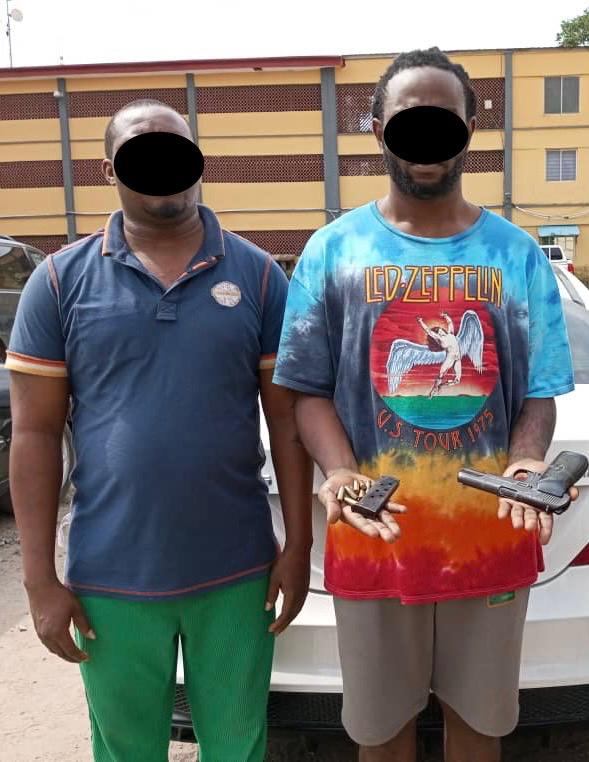 Two suspects have been arrested by policemen attached to Ajah Division, Lagos State Police Command for illegal possession of an English Beretta pistol with seven rounds of live ammunition.

The suspects identified as Bada Bayo and Segun Ogundele both aged 45 were apprehended during a stop and search exercise along Budo Specialist Hospital road Ajah Lagos state.

NigeriaCrime.com learned that the duo was arrested after policemen on routine patrol flagged down their vehicle, an unregistered Mercedes saloon car for a search.

Confirming the suspect’s arrest, Police Public Relations Officer, Lagos State Command, SP Benjamin Hundeyin said during a search of the suspects and vehicle, an English Beretta pistol with seven rounds of live ammunition was found in their possession.”

Meanwhile, the Lagos State Commissioner of Police, CP Abiodun Alabi, has assured residents of Lagos State of the unrelenting resolve of the Command to eradicate all forms of criminality in the state.

Recall that last month, operatives of the Rapid Response Squad have recovered two locally made short guns and a live cartridge.

It was gathered that the policemen were on routine patrol around Orile Igannmu when they heard gunshots from the direction of where the armed robbers attempted to operate.

The policemen traced the scene of the gunshots where the armed robbers had abandoned the arms and ammunition to escape.