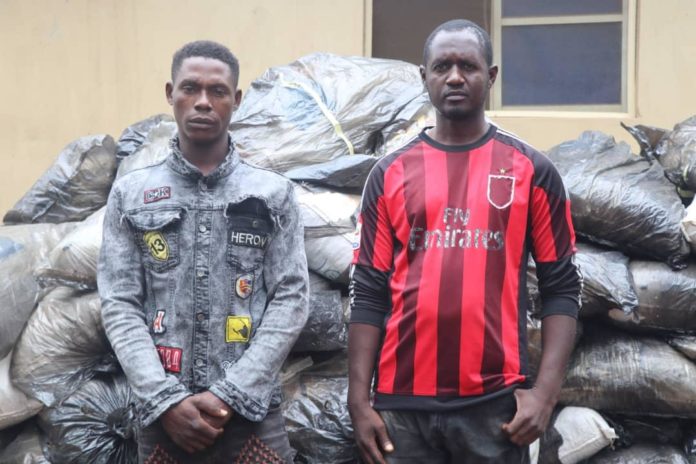 Operatives of the Federal Capital Territory (FCT) Police Command, have arrested two suspects who specialise in the illegal supply of prohibited substances/illegal drugs.

The suspects identified as Sani Muhamed aged 26, a resident of kano state, and Ahmed Usman aged 32 were arrested by the Command after receiving a tip-off.

The duo had One hundred (100 ) bags of Dry leaves (Cannabis Sativa) hidden in their truck.

NigeriaCrime.com learned that the prohibited substances and Cannabis Sativa were concealed beneath Fertilizer loaded in a Dangote Truck transiting from Ondo state to the Federal Capital Territory upon interception.

Adeh said the arrest “followed prompt reaction on the heels of actionable intelligence from Inspection Officers of the Dangote Group of Company fleets strategically positioned for control and management of the fleets of trucks at intermittent locations”.

“Upon the arrest, the suspects stated their involvement in the criminal conspiracy and the illegal possession of prohibited substances and affirmed that the illegal commodity is worth about 10 million naira while they were contracted and promised about Four hundred thousand naira (400,000) each.

She added that efforts are ongoing to arrest fleeing members of the suspected criminal syndicate while the suspects and exhibits will be transferred to the National Drug Enforcement Agency (NDLEA) upon the conclusion of the investigation”.

Meanwhile, the Commissioner of Police FCT Command CP Babaji Sunday has expressed concern over the high rate of drug and substance abuse.

Babaji noted that this is the second such case in less than three months, stressing that the above is one of the root causes for various acts of crime and criminality.

He added that the Command will continue to work hand in hand with the NDLEA to bring to the barest minimum the menace of drug/substance abuse in the Territory.

In the light of the above, the Commissioner of Police while reassuring residents of the Command’s uncompromising commitment to making the territory devoid of crime and criminality urges members of the public not to hesitate in bringing such information as the above and any other relevant information to assist in crime fighting to the Police.