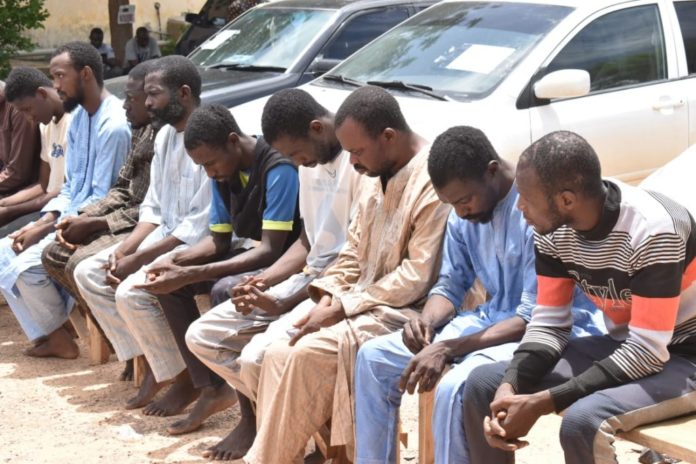 The Police Command in Katsina State paraded 19 suspected armed robbers and also recovered 13 vehicles suspected to have been stolen by them.

The Commissioner of Police in the state, Mr Idris Dauda-Dabban, disclosed this while addressing newsmen about the suspects on Wednesday in Katsina.

He said, “It will be recalled that recently, residents especially of the Katsina metropolitan area, were bedeviled with the activities of a syndicate that specialized in house breaking, armed robbery and theft of vehicles.

“The command did not rest on its oars, but launched a manhunt for the dare-devil criminals and to God be the glory, it succeeded in cracking down the syndicate terrorising the state.

“A total of 19 suspected members of the syndicate, including their ring leader were arrested and 13 suspected stolen motor vehicles were recovered by the command.

“On July 31, the syndicate broke and attacked the residence of one Nura Lawal of Modoji Quarters, GRA, Katsina, with a gun and other weapons.

The Commissioner added that the syndicate robbed Lawal of his vehicle, a Toyota Corolla L.E 2010 model, the sum of N340,000 cash and also his clothes.

“One of the suspects, Musa Isah, aged 35, of Behind Tourists Lodge, Katsina was accosted by police with the said vehicle at Kazaure, Jigawa state and the stolen clothes were also recovered from the vehicle.

“After diligent investigation, the duo of Abdullahi Mahmud, aged 35 and Babayo Abdulkadir, 32,  both of Bauchi township, Bauchi state, were arrested as receivers of the stolen vehicles from Katsina.

“Four fake transaction receipts/Invoices and stamps used in the course of issuing to unsuspecting buyers as genuine documents were recovered.

“Further investigation also led to the arrest of two other members of the syndicate, Ibrahim Musa and  Nura Isa of Jos, Plateau state.” Dauda-Dabban said.

Dauda-Dabban further said that  in the course of investigation, three suspected stolen vehicles were also recovered in their possession.

He said that another member of the syndicate, Muhammed Ibrahim, residing behind Tourists Lodge Quarters, Katsina, was arrested with a suspected stolen black Mercedes car used as their operational vehicle.

The CP added, “It can also be recalled that on Aug. 11,  Ibrahim  led his gang of armed robbers, attacked the house of one Samaila Samaila of Gidan Dawa Quarters, Katsina, with a gun and other dangerous weapons and robbed him of his car.

“In the course of investigation, the number plate of the stolen car, bunches of vehicle keys, matchets, and house breaking implements were found inside the trunk of the black Mercedes car in his house.

“The suspect confessed to have masterminded several armed robbery attacks in Katsina, robbed many vehicles, and also mentioned one Nasiru Mumuda of Sheka Quarters, Kano as his accomplice.

“On Aug. 8, based on credible infelligence, the command also succeeded in busting

and arresting seven members of a syndicate of terrorists, armed robbers and kidnappers terrorising Danja Local Government Area (LGA) and its environs.”