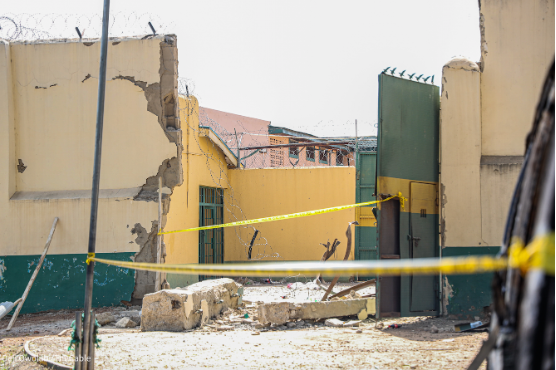 The Nigerian Correctional Service (NCoS) says 443 inmates who escaped from Kuje prison in the federal capital territory (FCT) have been recaptured.

This was disclosed by Abubakar Umar, NCoS spokesman, in a statement on Wednesday.

NigeriaCrime had reported that ALL Boko Haram and  very important prisoners had escaped after an attack yesterday.

Bandits attacked the prison with explosives on Tuesday night, freeing many inmates — including “all Boko Haram suspects”.

Umar, in the statement, said the attackers broke into the prison using explosive devices, through the main entrance and the fence of the facility.

The development comes shortly after an attack on the security team attached to President Muhammadu Buhari. He said a personnel of the Nigerian Security and Civil Defence Corps (NSCDC) attached to the centre was killed in the attack, while three personnel of the correctional service were seriously injured.

“443 have been recaptured, 551 inmates are currently in custody, 443  Kuje prison inmates are still at large, 4 inmates dead and 16 inmates sustained various degree of injuries and are being treated at the moment,” the statement reads.

“However, efforts are ongoing to recapture all fleeing inmates.

“The Service will deploy its Corrections Information Management System (CIMS) in synergy with National Identity Management Commission (NIMC) to track all fleeing inmates and return them to custody.”

The spokesman added that at the time of the attack, 38 military personnel were on the ground “in addition to personnel of the Nigeria Police Force, Civil Defence, DSS and our Armed Squad”.

“The public is also informed that some of the attackers were killed while some escaped with gunshot wounds,” he added.

“We, therefore, appeal to hospitals and o³ther medical institutions and practitioners to report anyone that comes to them for treatment for gunshot injuries to the nearest law enforcement agency.”