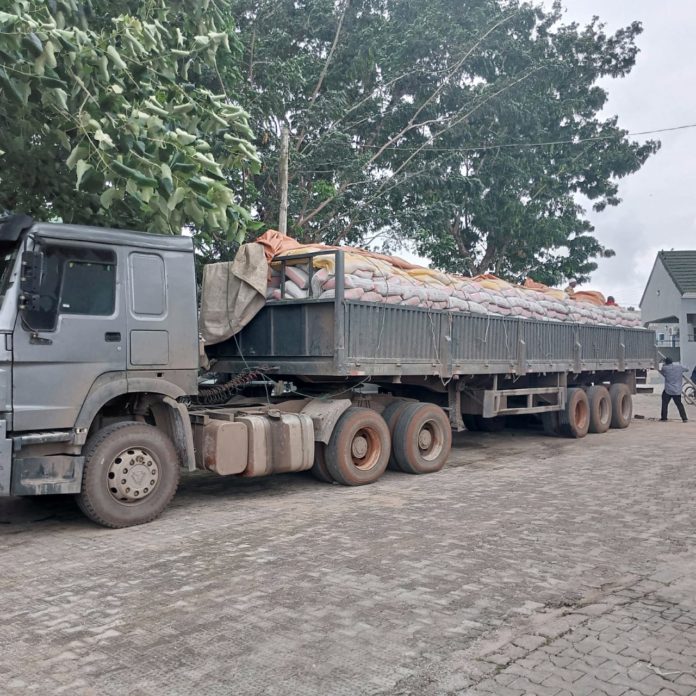 No fewer than 3,154 bags of foreign parboiled rice of 50kg has been seized in the last month by Ogun 1 Area Command of the Nigeria Customs Service (NCS)

Nigeriacrime.com learned that part of the seized items includes a truck with Lagos State registration No. EKY 971 YE belonging to Dangote group of companies, loaded with 75 bags of foreign parboiled rice of 50kg each concealed with 900 bags of Dangote cement was intercepted along Ibese road, Yewa North Local Government Area of Ogun State, in the early hours of Sunday, 21st August 2022.

Another Dangote truck with Kano State Registration No. BCH 531 XA loaded with 228 bags of smuggled foreign parboiled rice of 50 kg each concealed with some bags of Dangote cement along Lafenwa, Abeokuta axis, Ogun State in the early hours of today, 23rd August 2022.

Bamidele Makinde, the Customs Area Controller, Comptroller said the cumulative duty paid value for all the goods seized in the period under review amounted to N311,924,551.92.

Makinde added that “this quantity of rice if allowed into the Nigerian market would harm the federal government rice policy, aimed at providing staple food at affordable prices and employment to jobless citizens”.

Makinde said, “the Command during its intensive and intelligence-based anti-smuggling operations recorded a seizure of 3,154 bags of foreign parboiled rice of 50kg each. An equivalent of five trailer loads”.

“During the period under review, the Command generated a total sum of thirteen million, eight hundred and forty-eight thousand, three hundred and seventy Naira, Zero Kobo (#13,848,370.00) from import duty and auction sales of petroleum products (PMS) intercepted during anti-smuggling operations”.

“Aside from the proactive operations in checking illicit trade in Idiroko border, the Command also engages in non-kinetic activities whose objective is to make the area conducive for economic activities to thrive”.

“Currently, the Command’s football club (known as Customs FC) which has been in existence for decades was promoted from the Nigeria Nationwide League, Division 3 to Division 2 on 19th July 2022”.

He added that “presently, youths from the various border communities across the state constitute the majority of the club’s players. About 18 of them. Another six of its players are natives of different states of the country and Republic of Benin, while only eight of its players are officers of Nigeria Customs Service”.

“One of its coaches, a native of Ijebu Ode in Ogun State, Mr. Fatai Biliyu is currently undergoing training at the National Institute for Sports, Surulere, Lagos State for a one-year advance coaching course, being sponsored by Nigeria Customs Service”.

He said, ” one of the advantages derivable from the football club is to keep the youth, especially, native players from border communities engaged so that they may stay away from illicit and criminal activities while ensuring that they earn a living”.

While reassuring the legitimate business communities of the command’s maximum cooperation for trade facilitation, Makinde said, they were free to contact them for any trade-related information, inquiry as well as complaints.