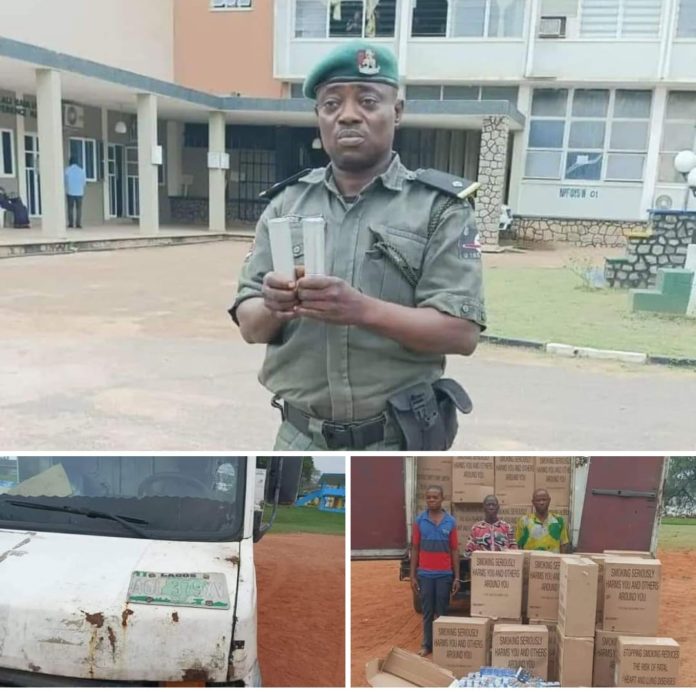 A level 14 elementary school teacher, Adebisi Ayodele is currently being investigated by the
Oyo State Police Command for impersonating a police officer.

Nigeriacrime.com learned that Ayodele presented himself as an Assistant Superintendent of Police attached to the Police Mobile Force Unit of the Nigeria Police Force for thirteen years.

Ayodele was providing illegal escort services in a Red Mitsubishi space wagon with Registration No. ARP 34 AA, dressed in complete police uniform in the company of another female passenger.

According to Ayodele, “I have been practicing the act for years and had successfully misled a lot of unsuspecting victims by my actions.

“I operate in Isolation along adjoining routes and link roads sharing boundaries with Oyo, Ekiti, and my base in Ogun State.”

At the point of arrest, he was found in possession of two unexpended canisters (Teargas) and a complete kit of Police Mobile Force Uniform, however wrongly worn.

Confirming the arrest, the spokesperson of Oyo State Police Command, Wale Osifeso said
investigation is ongoing to ascertain the source of his supplies, and motives and to apprehend the rest of his criminal ring.

In a related development, the operatives of the Command attached to the Monitoring Unit while on intelligence-based anti-crime patrol at Toll Gate area that a trailer loaded with Cigarettes suspected to have been hijacked and diverted by some unknown hoodlums was sighted where the hoodlums were waiting for their criminal receivers at the TOLL Gate area, Ibadan.

Meanwhile, the Commissioner of Police, Oyo State Command, Adebowale Williams has vowed to be ruthless in dealing with unscrupulous and criminal-minded individuals operating in the State and its environs.

Commissioner of Police, enjoined members of the public to continue cooperating with officers and men of the Command while discharging their duties and to be unrelenting with providing credible and timely information capable of nipping crime in the bud at all times.