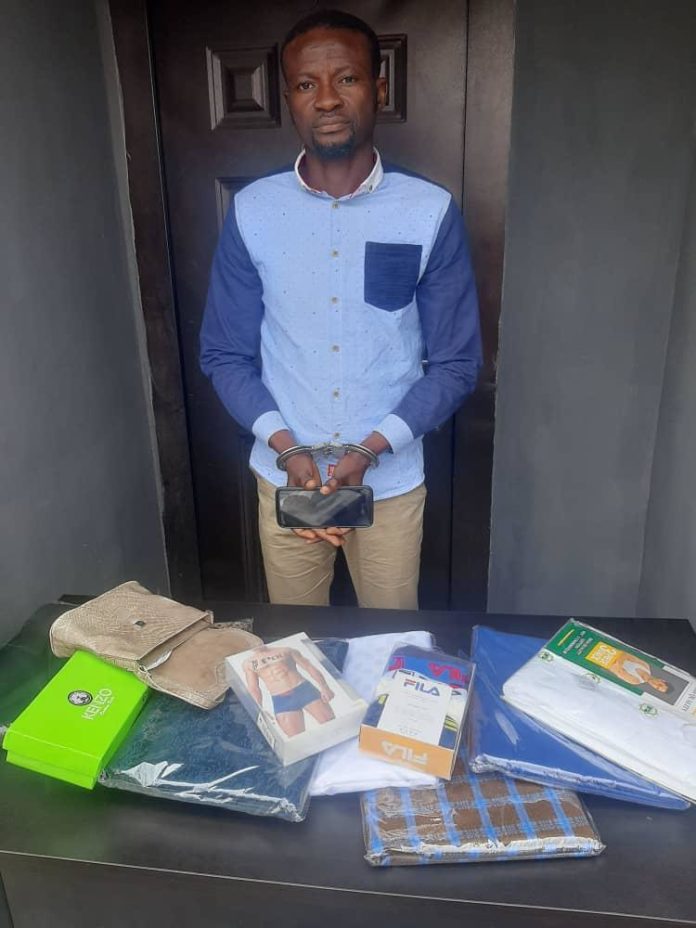 A 44-year-old man, Olumide Agboola is currently cooling off in one of the police cells at Makinde Divisional police for robbing online vendors.

Agboola was arrested following a painstaking investigation that was launched after several reports were received about his activities.

NigeriaCrime.com learned that different CCTV footage at his various crime scenes has aided in the irrefutable identification of the suspect.

It was gathered that during his last operation, Agboola dispossessed his victim of her Infinix Hot 9 mobile phone, as well as the assorted fabrics, underpants, and singlets she came to sell, all valued at N193,000.

Preliminary investigation revealed that the suspect’s modus operandi was to pose as a genuine buyer on social media platforms, order items, and request vendors to supply the items at designated hotels, where he would then rob them.

Confirming the story the Spokesperson of Lagos State Police Command SP Benjamin Hundeyin said the investigation is ongoing to recover other stolen items from his previous operations.

Recall that Ifeanyi Odieze Ezenagu, who lures, drugs, and robs women who went on blind dates with him was also arrested recently.

Before his arrest, Ezenagu lured about 30 women to different hotels where he drugged and robbed them clean.

He however met his waterloo after robbing six women of their belongings worth N2,368,000 using the same modus operandi.

According to him, he reportedly lured them to a hotel, where he laced their drinks, causing them
to fall into a deep slumber, and thereafter robbed them of their 3 iPhones 12, 2 iPhones 11 Pro Max, 1 iPhone XR, one Nokia phone, one wristwatch, and one gold necklace, valued at N2,368,000.