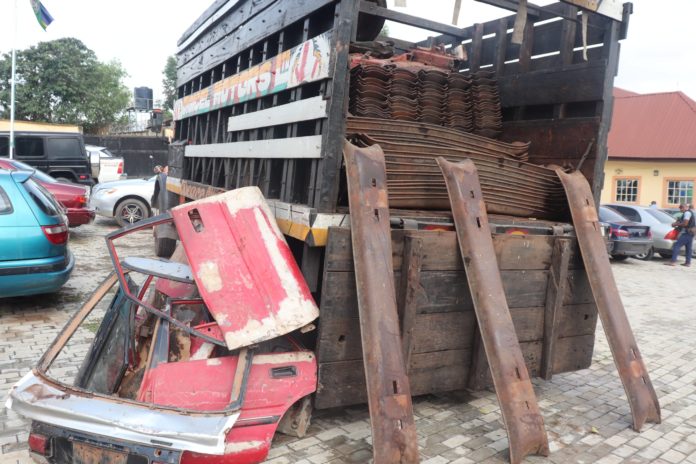 Operatives of the Railway Police Command have arrested thirteen suspected rail vandals in different parts of the country between May and June 2022.

Police sources said one of the suspects was arrested by operatives from Kafanchan Railway the police division following a credible tip-off. The operatives reportedly swung into action and intercepted a truck with registration number BCH-933 XA belonging to Dangote Cement Company loaded with 96 pieces of standard gauge Rail irons.

The truck was loaded with vandalized railway iron rails tucked away in a bush at Unguwar Yawa Village, Zango Kataf Local Government, Kaduna State. Meanwhile, investigations have been heightened to apprehend other accomplices at large.

Similarly, Civilian Joint Task Force attached to the railway station in Kaduna state arrested five suspected vandals in the Abakwa axis on the 12th of May 2022. The suspects identified as Abubarkar Ayuba, 22, Musa Ibrahim, 17, Umar Bello, 18, Samaila Rabiu, 18, and Yahaya Abubakar, 18, were intercepted while removing and vandalizing rail irons of the Abakwa old rail line with a gas cylinder.

Some of the exhibits recovered from them include ten (10) sacks of vandalized standard gauge rail patrol clip Irons, measuring scale, and a hammer.

In Abeokuta, at Alagada village axis, two men Idowu Abiodun and David Titus both 24 years old were apprehended by men of the Abeokuta division while vandalizing rail tracks. Railway patrol clips were recovered from the suspects as exhibits. The suspects have, however, been charged in court.

The Commissioner of Police, Railway Police Command, CP Yetunde Longe while confirming the arrests of the said suspects in various parts of the country, stressed the importance of Citizen-Police Partnership and Community Policing in securing lives and properties.

She added that no stone will be left unturned in the war against Railway vandalism as perpetrators arrested will be made to face the wrath of the law to its full extent.