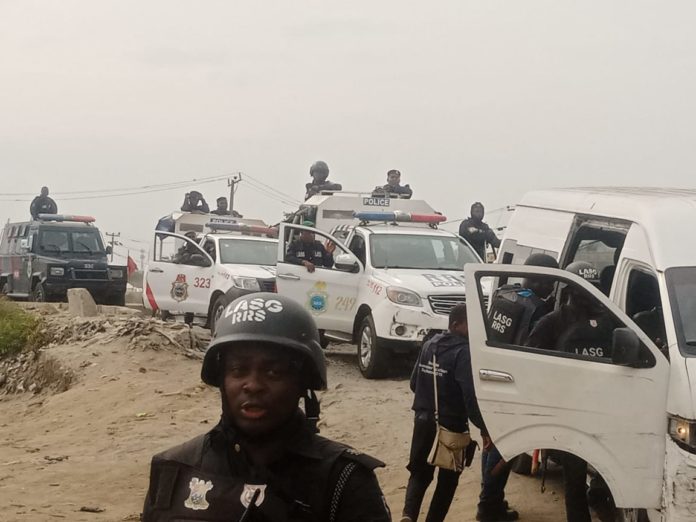 Commercial and social activities on Thursday, August 25 were grounded in Ijanikin/Otto communities as cultists within both communities engage in a fierce supremacy battle.

The crisis started last week when the annual masquerade festival started. Cultists reportedly took advantage of the masquerade processions to unleash terror, as they went on rampage in Ijanikin Community.

NigeriaCrime.com learned that at about 9 am on Thursday, Otto and Ijanikin cult boys engaged in a free for all fight, shooting sporadically in the air forcing traders, business owners, and residents to scamper for safety.

Many commuters, who were going to work were stranded at the bus stops, while some had to trek for hours because of the chaotic situation.

When Nigeriacrime.com got to Ijanikin community shops and business centers within Cele, Vespa, Ileoba, and deeper bus stops were locked.

Some of the shop owners complained bitterly that the activities of cultists have become terrifying in the community as the security agency seems to be helpless.

According to Iya Itunu, this matter is between two communities Otto and Ijanikin. This is how they fight every time. Anytime their masquerades come out the cultists use them to rob and destroy people’s goods. They used the masquerade festival to perpetrate their criminal activities. That is why any time they start fighting we have to lock our shops. if we don’t lock the shops they will attack, steal, and destroys our wares.

A food vendor at Vespa bus stop said the activities of these cult boys started last week when their masquerade (wokowoko) came out. Since then it continued till it escalated today. It took hours for police operatives to calm the situation. On Monday the same thing happened, the traditional ruler had to police to tame the situation before calm was restored.

Recounting his ordeal, Ejiro Steve said I was inside a bus, on my to LASU when I witnessed the incident. Commercial buses had to stop working. I was stuck on the road for hours because I couldn’t pass as they had started burning tires on the road

Confirming the situation the public relations officer, SP Benjamin Hundeyin said we are fully aware of the ongoing trouble in Ijanikin area of Lagos State. While officers and men of Ijanikin Division are fully on ground, reinforcement has been despatched. Meanwhile, the road has since been reopened. We are closely monitoring the situation.”