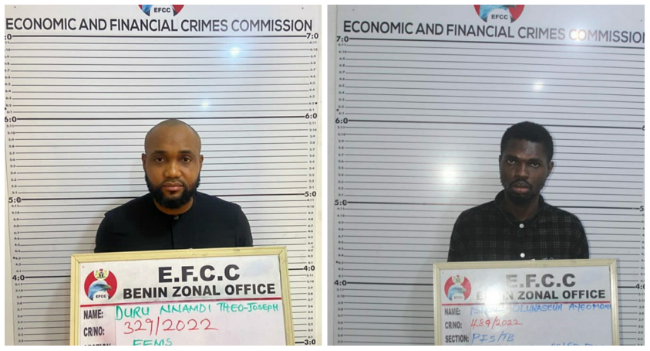 The duo were convicted, after pleading guilty to one- count separate charge, bordering on, retention of proceeds of criminal conduct and possession of documents containing false pretense.

“That you Nnamdi Theo-Joseph Duru sometimes between 1st January, 2017 to November, 2021 in Edo State within the jurisdiction of this honourable court did retain the aggregate sum of N8,000,432,22 in your Access Bank Account Number:0090793423 knowing that same represent proceeds of your criminal conduct to wit’ Cybercrime and thereby committed an offence contrary to Section 17(a) of the Economic and Financial Crimes Commission (Establishment ) Act 2004 and punishable under Section 17(b) of the same Act,” the charge reads.

Itsueli also asked that Duru forfeits his phone to the government while the bank accounts are closed.