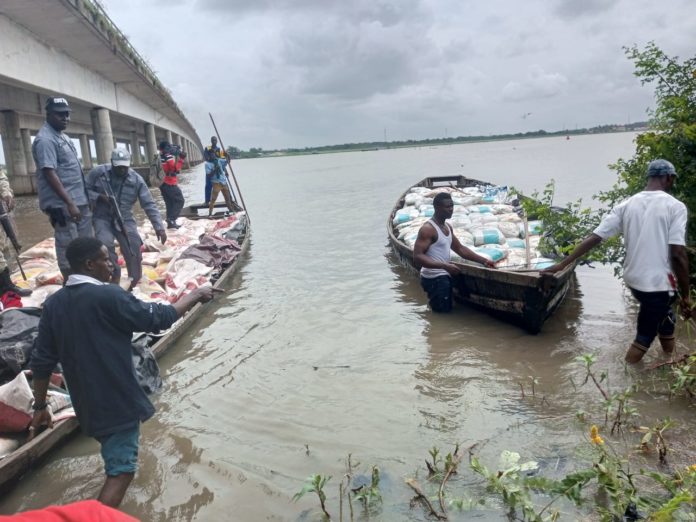 The Joint Border Patrol Team (JBPT) Sector 2 South-West, Lagos says it has intercepted 415 bags of 50kg rice loaded inside two boats being smuggled to the country along Badagry waterways.

It was reported that JBPT comprises officers of Nigeria Police, Nigerian Army, Nigeria Immigration Service, Nigeria Customs, and DSS, coordinated by the Office of the National Security Adviser (NSA).

NigeriaCrime.com gathered that the two boats were intercepted the middle of the river. The arrested boatman and others jumped inside the rivers and escaped when they got to Gbaji under the bridge.

Mr. Nurudeen Hassan, the Controller, JBPT, Zone 2, disclosed this during a press briefing at Gbaji Checkpoint along Seme expressway on Saturday.

According to Hassan, the operation took place at about 4:10a.m at Gbaji waterways, Badagry, by the JBPT operating in the axis.

“On Sept.10, at about 4:10a.m at Gbaji waterways in Badagry, Lagos, the JBPT led by CSC Dinya Sabo, acting on credible intelligence provided by the service.

“The JBPT intercepted two wooden boats loaded with 415 bags of foreign parboiled rice suspected to be snuggled into the country from Benin Republic,” he said.

Hassan said that the intercepted rice would be offloaded from the wooden boats and taken to the government warehouse at Seme.

He commended the officers of the team’s successful operation on the sea, adding that they were known to always intercept on the expressway alone before.

Hassan urged the smugglers to desist from sabotaging the economy by smuggling contraband into the country.

The controller said his men would not stop until they get rid of the bad eggs in society.

Speaking on the mode of operations, Sambo said his team was informed by their informants from the point of take-off in Benin Republic.

“We intercepted them in the middle of the river and arrested the boatman and others but when we got to Gbaji under bridge, they jumped inside the rivers and escaped,” he said.

The 415 bags of rice were taken to the Customs warehouse in Seme where they kept seizures from smugglers.