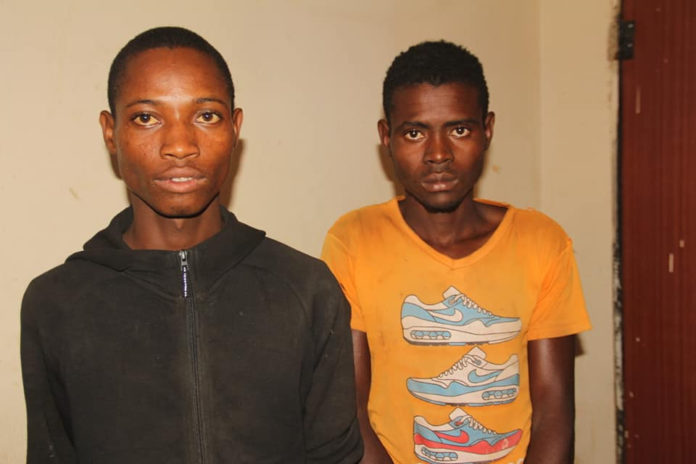 Ahmed Wakil, spokesperson of the command, disclosed this in a statement on Tuesday.

Wakil said the suspects were arrested by police operatives from Burra Divisional Police Headquarters in Ningi Local Government Area of the state.

When the victim didn’t comply with their demands, they set his entire house ablaze which resulted in the loss of property.

The suspects later called his brother, Babangida Usman with the same phone number and threatened him that they will kill their mother.

The victims succumbed to their initial demand thereby paying the sum of N300,000 through one Babangida Ibrahim.

“According to the PPRO, the suspects, Nasiru Tambaya, 20, and Usman Idriss,27, called one Malam Saddi and threatened to kill him if he fails to give them the sum of N300,000. On 20th July 2022 at about 0800hrs Nasiru Tambaya and his accomplice called one Malam Saddi of Maikwandi village by phone and intimidated him to produce the sum of three hundred thousand nairas (N300,000) or else they will kill him but he didn’t comply with their demands,” the statement read.

“Subsequently, on 23rd July 2022, they went and set his entire house ablaze which resulted in the loss of properties, thus; one Bag of Guinea corn, one bag of maize, one bag of soya beans, 60 pieces of cloth, three beds, three vita forms matresses and other valuable properties. All are valued at four hundred thousand nairas (N400,000)

“The suspects later called his brother Babangida Usman ‘m’ with the same phone number and threatened him that they will kill their mother”Consequently (the victims) succumbed to their initial demand thereby paying the sum of three hundred thousand nairas (N300,000) through Babangida Ibrahim at Borkono road, Burra village,”

Sequel to the discreet investigation, all the suspects confessed to the crime.

The following exhibits were recovered from the suspects; one Honda motorcycle with engine number JAUDE3097430 and chassis number BLOJA460LN003798 red in colour, one Techno handset, one campus bag, two facing cap, one pair of rubber shoes.”