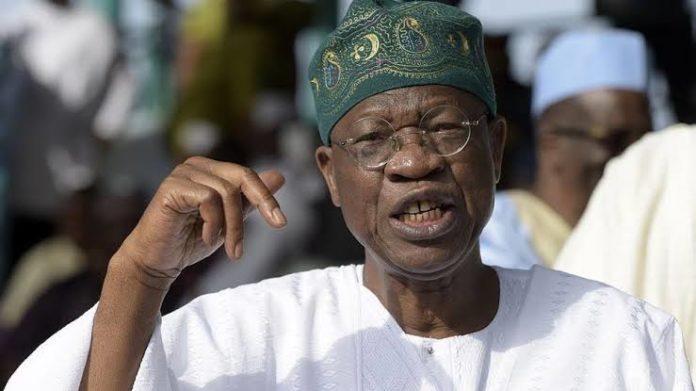 Lai Mohammed, minister of information and culture, says insecurity in some parts of the country is being worsened by fake news and misinformation.

The minister said this on Tuesday when he represented President Muhammadu Buhari at the Citizens Summit for National Integration, Peace and Security organised by the Nigerian Insti­tute of Public Relations (NIPR) in Abuja.

“This summit couldn’t have come at a better time, with the issues of peace, security and national unity on the front burn­er of our national discourse. In recent times, in particular, the issues of peace and security have been on the lips of many Nigerians, against the backdrop of rampaging terrorists, bandits and kidnappers. This crisis of in­security has, unfortunately, been exacerbated by the twin evil of fake news and misinformation,” he said.

While citing some examples to clearly illustrate how fake news is fueling apprehension and anxi­ety in the country, Alhaji Moham­med said on August 10, this year, the Kaduna State government had to debunk an online report claiming that hundreds of ban­dits had laid a siege to the Kadu­na-Zaria road.

He said the widely-circulated fake news even advised travellers not to enter or leave Zaria due to the presence of bandits at Dum­bi and Jaji along the Zaria road, adding: “Imagine the apprehen­sion and disruption of plans that this fake news could have caused. Imagineitsimpacton the security operatives who are doing everything, including paying the ultimate price, to keep us safe?”

“Also, in April 2022, a drone video showing a group of five men wearing red clothes and cooking inside an unknown for­est went viral. Those circulating the video claimed that it was some wherein Nigeria. But when BBC did a fact-check on the drone video, it discovered that it was not in Nigeria. The video was circu­lated just to create panic among the citizens and put the society on edge.

“In June 2022, there were reports of bandits using a heli­copter to attack residents in four communities in Kajuru Local Government Area of Kaduna. The Kaduna State government had to debunk the story by clari­fying that the chopper was actu­ally an Air Force helicopter dis­patched to repel an attack in the area. Again, imagine the panic that would have been triggered by this fake news,” them inister said.

Mohammed said his ministry is addressing the men­ ace through the National Campaign against Fake News and Misinformation, a nationwide ad­vocacy campaign, in addition to working with the various social media platforms like Facebook and Google to curtail the spread of fake news and misinforma­tion. ­

He also commended NIPR for hosting the summit in order to promote dialogue and national cohesion, especially in view of the myriad of challenges to unity, peace and security facing the country.