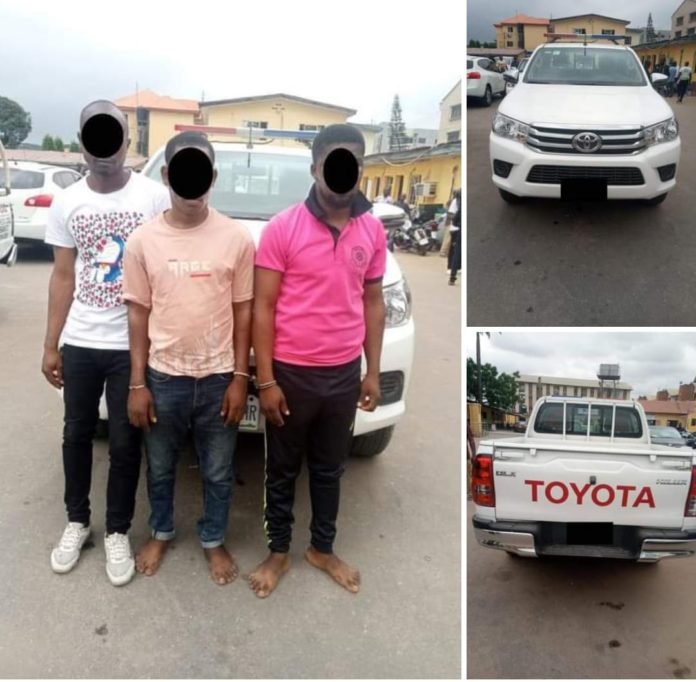 A 41-year-old driver, Ortema Paul, and his guarantor, Iorfa Paul has been arrested by detectives attached to the Lagos State Police Command.

Ortema was arrested within Ojodu axis of Lagos State while on his way to sell off his employer’s 2021 Toyota Hilux pickup van for Twenty Million Naira.

NigeriaCrime.com gathered that the suspect was arrested on August 9, 2022, alongside his guarantor, Iorfa Paul aged 40, and Ojo Solomon aged 29 who was contracted to locate and disable the tracker in the vehicle.

All the suspects were arrested together in the vehicle while trying to sell it. The vehicle was bought brand new and is just three weeks old.

Confirming the arrests, Police Public Relations Officer, Lagos State Command SP Benjamin Hundeyin said the suspects will be arraigned in court at the end of the investigation.

Meanwhile, the Commissioner of Police, Lagos State Command, CP Abiodun Alabi, assured residents of Lagos that the Command will continue to work towards the decimation of crime and criminality in the Centre of Excellence.

In a related development, Police recently arrested two fleeing drivers in Lagos who allegedly stole their employer’s 2010 Toyota Corolla in Ikoyi in Sango Ota, Ogun State with the stolen car while they were allegedly looking for a buyer.

The Divisional Police Officer, DPO in charge of Ikoyi Division, Ikoyi, Lagos, CSP Tijani Mustapha N’abba who upon receiving a report of the stolen car swiftly, gave a marching order to his crack team led by Inspector Tony Eigbokhan to fish out the fleeing drivers and recover the stolen car from them anywhere they might be hiding.

Following the directives, the police team swung into action and tracked the two drivers identified as Moses Christian, 48, and Samuel Okanimme, 43 to Sango-Ota in Ogun State and arrested them with the stolen car while they were allegedly looking for a buyer for the car and brought them back to Lagos.

The police said the incident occurred on 8 July 2022 in Ikoyi, Lagos when the suspects were sent by their employer, the Management of Twinwaters Development Limited to take the car to their mechanic to service it, but that instead, the drivers allegedly drove the car to Sango-Ota in Ogun State to look for a buyer for the car with registration No. EKY 639 FL valued at N3,100,000.