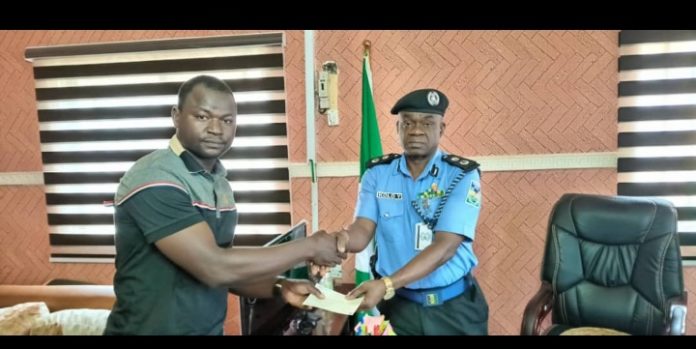 As part of the Inspector General Police’s welfare initiative to serving, and families of deceased officers of the Nigeria Police Force, on Thursday, 7th October 2022, the Commissioner of Police Zamfara state Command CP Kolo Yusuf psc, on behalf of the Inspector General of Police, IGP Usman Alkali Baba, presented cheques worth Thirty-Four Million, Five Hundred and Ninety-Seven Thousand, One Hundred and Forty-Three Naira, Forty-Nine Kobo (N34, 597, 143. 49) to ten next of kins of the deceased officers including one CPL Sani Sagir attached to Gummi Division who sustained injury while on operations against Bandits in Zamfara state.

The Cheques Presentation was in continuation of the IGP’s Group life welfare insurance/Personal Accident schemes for families of deceased officers, where cheques worth Thirty-Four Million, Four Hundred and Ninety-Seven Thousand, One Hundred and Forty-Three Naira, Forty-Nine Kobo (N34, 497,143.49)were presented to Nine (9) next of kins, while a cheque of One Hundred Thousand Naira was presented to CPL. Sani Sagir was attached to Gummi Division as a medical expense for the injury he sustained during the operation.

The Commissioner of Police in his remark, appreciates the Inspector General of Police for his continuous concern for the welfare of Police officers, describing the gesture as timely and will go a long way in alleviating suffering being faced by families of deceased Police officers and equally boost the morale of the serving personnel to continue to put in their best in the ongoing campaign against activities of criminal elements across the country.

The CP, therefore, charges the beneficiaries to utilize the money judiciously, noting that, in the last year, the Command had received a similar gesture from the Inspector General of Police eleven (11) times and presented the same to the beneficiaries.

Some of the beneficiaries, Charles Mark Jatau and Zainab Zubairu, who spoke on behalf of other Next of Kins thanked the Inspector General of Police for the gesture and promised to use the money judiciously.