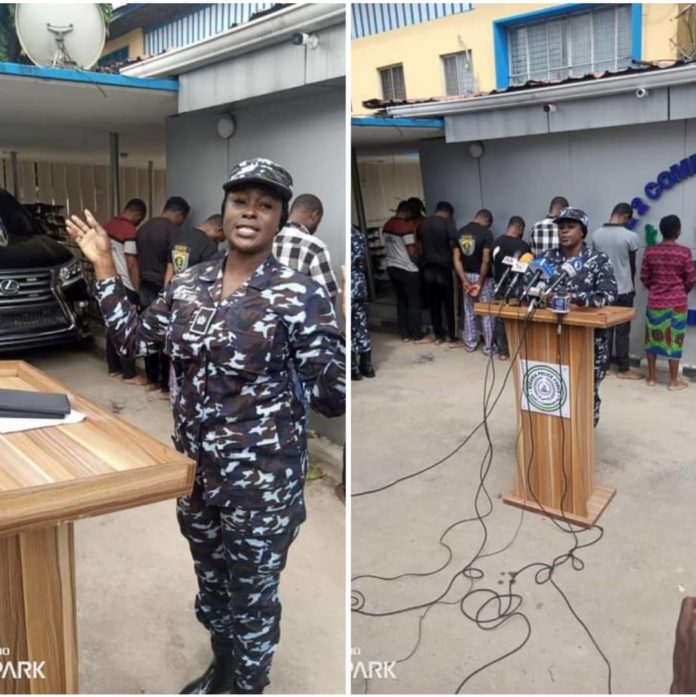 Seven suspected armed robbers who stole electrical cables worth Eighty Million Naira (N80m) from a company in Yaba are currently being investigated by operatives of the Zone 2 Police Command, Lagos.

The suspects were arrested after Jus Partners Cosmopolitan Limited, a telecommunications consultancy company petitioned the Assistant Inspector-General of Police (AIG), Bode Adeleke stating that armed robbers stormed the company located at Yaba on June 20, 2022, tied the security guards on duty, and made away with 16 drums of 96 Core Starlite Optic cables, estimated at Eighty Million Naira (N80m).

While parading the suspects alongside other notorious hoodlums, the Zonal Police Public Relations Officer (ZPPRO), SP Hauwa Idris-Adamu said the robbers were apprehended within two weeks.

According to Idris-Adamu, the team immediately swung into action and deployed technical and Intelligence-based investigation.

Nigeriacrime.com learned that the team of covert detectives accompanied the complainant into the market and directed the company’s representative to pretentiously walk into the heart of the business community on a market survey of the particular cables.

This idea turned out fruitful as the first person the company’s representative met, though in the business of buying and selling such items, later gave the investigating team a leeway into nabbing the culprits.

Photographs of the exact electrical cables were shown, and to show commitment, the company was directed to make a down payment of Five Hundred Thousand Naira (N500,000) before the company’s representative could be taken to the warehouse, a deal that was struck, and money remitted into the account of one Felix Onyema, who turned out to be the principal suspect.

READ ALSO: What I Carry In My Car Boot When Am Traveling – Singer, Rema Reveal

Eventually, the electrical cables were recovered from Felix Onyema’s residence at Sibiri, who has since then gone into hiding.

Afterward, all the seven suspects, neck deep in the criminal act, were nabbed by the operatives and whisked to the Zone 2 Police Command.