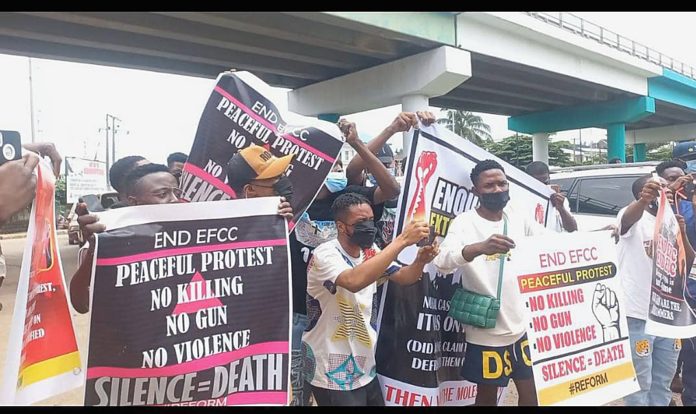 Following the incessant illegal arrests by officers of the Economic and Financial Crimes Commission, EFCC, hundreds of youths on Thursday, 6th October 2022 stormed the Secretariat housing the Governor’s Office in Agodi, Ibadan area of Oyo State in a protest.

According to one of the protesters who identified himself as Wale Oluwasegun, an Engineer by profession, said they are agitating against indiscriminate arrest by the EFCC, who he said, many times accused them of being fraudsters.

Oluwasegun, who said he is also into real estate, lamented that on several occasions, he has been arrested by officers of the EFCC, accusing him of being into fraud.

He said: “who doesn’t want to live a good lifestyle? If I have money, will I be leaving in a room?”

“They will arrest us and after searching our phones, if they didn’t find anything incriminating there, they will still arrest and charge us.”

“I am an Engineer by profession and I also sell landed property; I have a family and two kids. I live at Akobo in Ibadan.”

“They should leave us alone; we are not saying they should not perform their duty, but we want peace. I don’t even have a car. Whenever they arrest us they will be demanding N1.5 million,” he said.

Meanwhile, young Nigerians are condemning the modus operandi of the agency and its operatives who have gradually become an extortion agency.

Lamenting another protester Temitope Abbey, a virtual assistant said EFCC is one of the biggest failures in Nigeria today. The number problem Nigeria faces today is corruption in government, but EFCC left these big elephants to go after rats. The high level of internet fraud today is a result of lack of opportunities caused by corruption.

EFCC is promoting Bribery and not stopping corruption. No single politician or petty yahoo boys have ever been convicted. It is always the same pattern on replay mode. Collect money from them and release them. Some officials of EFCC are now richer than some politicians.

Olubukola Mojisola a software engineer, noted “We don’t have anti-corruption agencies in Nigeria all we have are groups of well-organized criminals on uniform extorting and intimidating the voiceless. @officialEFCC a revolution is coming and it is going to be far bigger than EndSars. I swear Nigeria is just a crime scene.”