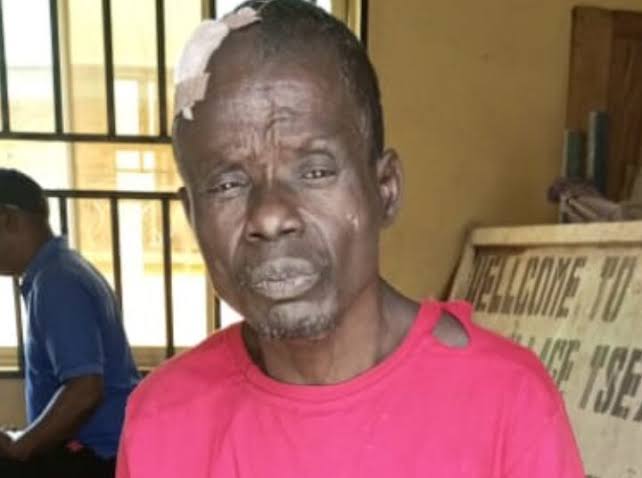 A 45-year-old man from Benue State has been arraigned at a Makurdi Magistrate Court for cannibalism.

Jeremiah Ode, from Igwe Ochekpo in Oju Local Government Area, who was caught eating the head of a woman he allegedly killed on her farm, is being prosecuted at a Makurdi Magistrate Court, for the gruesome murder of Priscilla Adoga, 65.

Inspector Omaye Ujata, the Prosecuting Police Officer, told the court that the incident which occurred on Friday, August 19, was reported to the police by Silas Igiri of Oju Local Government Area.

According to Igiri’s report, the accused went to the farm where his uncle’s wife, Priscilla, was working and killed her using a machete.

After severing Priscilla’s head, he prepared pepper soup with it right there on the spot and was eating it when he was caught.

Sources in the community told newsmen that, when Priscilla did not return from the farm at the normal time, her relatives went in search of her, only to find Jeremiah, known in the community to be mentally deranged, having a meal of the woman’s head.

When asked why he did that, Jeremiah reportedly said he only started with the head after which he would proceed to her body.

When asked by the Police to give his account of the incident, Jeremiah reportedly narrated how he and Priscilla fought each other with their machetes until he overpowered her.

The police considered the narration too normal to be that of a mad man and, therefore, decided to prosecute him.

“Although the Prosecutor told the court that the accused has confessed to committing the crime, no plea was taken, for want of jurisdiction.”

The Chief Magistrate, Regina Alagh, therefore, ordered that the accused be remanded at the Federal Correctional Centre, Makurdi.

Although the court declined jurisdiction to hear the case, the accused pleaded guilty of the charge, when the case was mentioned.

The case has been adjourned to November 11, for legal advice from the State Ministry of Justice