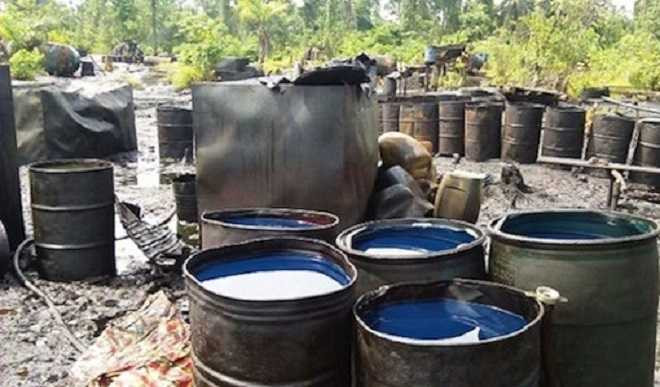 David Olabanji, a black market operator, on Saturday, lost his wife, Rhoda, and his two children, during an explosion at his shop in the Dantata area of Satellite Town, Lagos State.

NigeriaCrime gathered that Olabanji, who had been dealing in the adulteration of petroleum products, among others, was at his shop with his family when the explosion occurred suddenly.

In a bid to rescue their children who were sleeping in the shop, David’s wife reportedly ran inside the shop.

According to a source said the black marketer’s wife and two children were burnt to death by the fire that razed the shop.

“The man usually deals in the adulteration of PMS products, among others, in his shop. Around 4.30pm on the day of the incident, the man and his wife were outside the shop, while their children were sleeping inside when fire started burning the shop,” the source said.

“The wife quickly rushed in to rescue her children but she was unlucky. She, alongside her children, got burnt to death by the fire. The man also made an attempt to rescue his family but he couldn’t.

“He sustained severe burns and was rushed to a nearby hospital for treatment. The man was adulterating the PMS products around the shop when the explosion happened.”

He said, “Due to the presence of tankers around the neighbourhood, he always gets products to sell. That man sells oil, petrol, diesel and other things to people in the community.

“In fact, whenever there is fuel scarcity, if you come to his shop, you will still get the products. It was just unfortunate that this thing happened to him and his family.”

Another eyewitness, a food seller, who does not want her name mentioned for security reasons, said David’s children were minors, adding that the condition of their father had been unknown to residents.

She said, “The shop where I sell food is just a few buildings away from the burnt house. The wife of the man who sells this petrol here, and the children she came with died in the fire that happened here. The wife brought the two small children from Ibadan to spend the holidays with their father but now they are dead.”

Another eyewitness, Janet Oluwawemimo, when the fire was burning, the deceased woman called for help but the intensity of the fire discouraged people.

He said David would be investigated for engaging in such an illicit act, adding that he was still undergoing treatment in a hospital.

“The children were sleeping inside and the wife ran to rescue them, but got burnt to death alongside her children. The man’s family actually came to visit him from Ibadan. An investigation into the incident is ongoing.”