Our leader stole part of the ransom paid –kidnappers 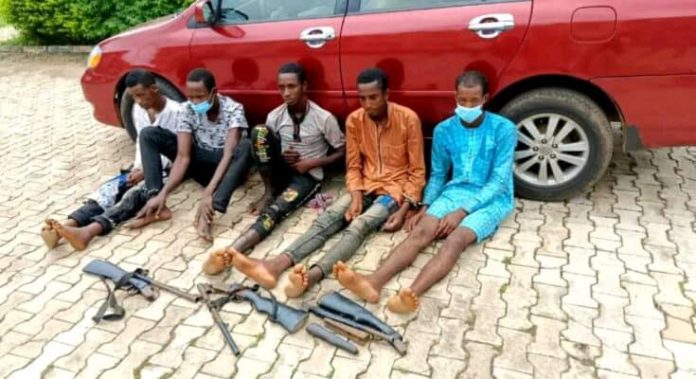 Five members of a kidnapping syndicate responsible for the abduction of Ondo Monarch, Onikun of lkun, Mukaila Bello have revealed that their leader stole half of the ransom paid by the victim’s relatives.

The suspects identified as Ilyasu Lawal, 27, Mohammadu Abubakar Sidi, 26, Garuba Bature, 36, Abubakar Dangy, 20 and Mohammed Mosere, 25 who kidnapped a traditional ruler and three others in Ondo state lamented that their leader stole part of the ransom paid by the victim’s relatives.

Recall that the traditional ruler, the Onikun of lkun, Mukaila Bello and others who include a former House of Assembly Candidate for Akoko North-East Constituency Yèyé Gbafinro , a chieftain of the All Progressives Congress, Hon. Adeniran Adeyemo and a community leader, Bashiru Adekile, were kidnapped at about 6:30 pm around Ago Yeye, along Owo/ lkare road on August 4, 2022, after the driver conveying them was shot in the head.

The abductors had demanded for N200 million from the families of the victim but they negotiated it down to N4 million.

The suspects while being paraded expressed shocked to hear that the victims paid N4 million ransom whereas their leader, who is on the run, claimed he received N2m as ransom.

NigeriaCrime.com learned that their leader, who was at large, declared N2 million as ransom paid for the victims, the relation of one of the victims, Abdul Muritala, who took the ransom to their leader insisted openly that he delivered N4 million to him and he counted it before releasing the suspects.

The five other suspects who were angry said only N2 m was declared to them.

They said their leader gave them N200,000 each for the operation.

According to Abdul Muritala, who took the ransom to the kidnappers, “it was the entire community that contributed the money.

“They said we should pay N200m but we begged them and they reduced it to N4m. The community contributed the ransom money. Our people spent three days with them without eating any food.

“They released them along Ikare Owo road. I was the person that took the ransom money to the place. I saw the kidnappers

” They came out with guns. They did masks wear masks when they came out to collect the ransom. When we dropped the money they said we should go and that we will see our people soon.”

Parading the suspects at the state police command headquarters, the state Police Commissioner, Oyeyemi Oyediran said that four of the suspects were arrested at their residence in Ibadan while Dangy was arrested in Owo town.

In a related development, the Police Commissioner said that the kidnappers that killed a soldier and abducted a Lebanesehave Owo have been arrested and charged in court.

Oyediran said the suspect, Yusuf Hamza, was arrested through forensic investigation and that efforts were on to arrest other suspects.

He added that the suspects confessed to commission of the crime and that they would soon be charged to Court. Continue