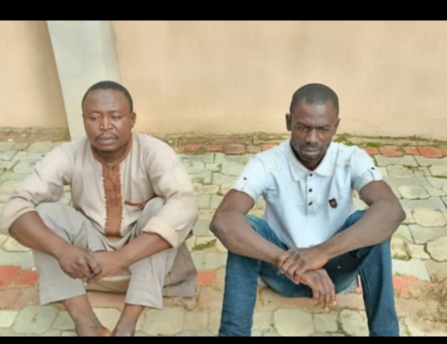 NigeriaCrime.com gathered that the arrest of the two suspects was made following a complaint received from members of Yar Katsina community in Bungudu LGA against the principal suspect Lawali Musa, who deceitfully extorted the community.

The Principal suspect Lawali Musa confessed to having collected the sum of five million naira (N5, 000,000) from the community in the name of assisting them to have security agencies deployed to their community.

On the other hand, the second suspect Jamilu Isah revealed that the sum of eight hundred thousand naira was deposited into his account.

Confirming the arrest, SP Mohammed Shehu, Police Public Relations Officer, Zamfara State Command said the investigation is ongoing to arrest other suspects in connection with the offense and will be charged to court, thereafter, to face the full wrath of the law, so that it will serve as deterrence to others.

Meanwhile, the Command reiterated that deployment of security operatives to villages and communities is purely free of charge, and calls on all and sundry not to allow any person or group of person to deceive them in the name of securing deployment of security operatives to their areas. Instead, they should reach out to the Police or any relevant authority regarding the general security of their areas. Such a person should also be reported to the Police or any security agency for appropriate action.