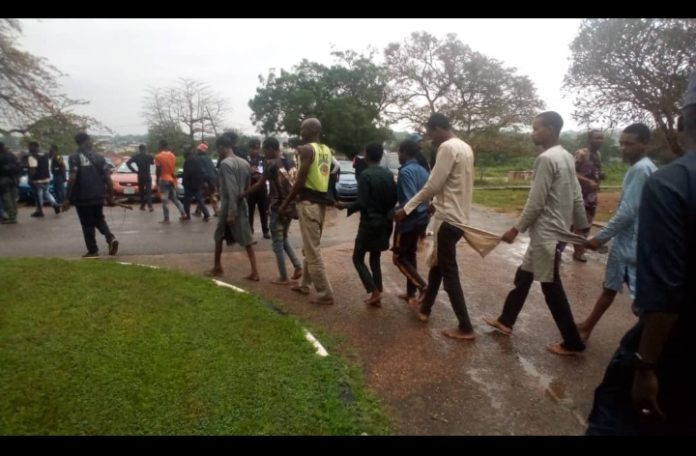 Operatives of the Oyo State Police Command, have arrested 15 suspected kidnappers in different locations in the State. Also, two victims were rescued and assorted firearms and ammunition were recovered.

NigeriaCrime.com learned that the suspects are specialised in intercepting parents while taking their children and wards to their respective schools within Ibadan and its environs.

According to the Commissioner of Police, Adewale Williams, “on 21st July 2022 at about 8:30 pm Mrs Okafor Patience was conveying her children to school in a Toyota Rav-4 Jeep when she was intercepted by some members of a dreaded kidnapping syndicate who were heavily armed with sophisticated firearms and some other dangerous weapons at Orita Challenge area, Ibadan.

“The kidnappers then proceeded in bundling the said Mrs Okafor Patience, into one ML-350N Mercedes Benz Jeep which they drove off the scene, whisking her away to an unknown destination from where they subsequently contacted her relatives.
Immediately the case was reported at the nearest Police Station.

“Also on 28th August 2022, the same syndicate intercepted Atitebi Ganiyat who was conveying her eight-year-old son to school in a Toyota Highlander Jeep along Felele link road, Lagos/Ibadan expressway.

“Fortunately, the eight-year-old boy was abandoned in the Highlander Jeep at Sagamu area of Ogun State.

“Sequel to these developments, painstaking investigations continued by the command Monitoring Unit and these led to the arrest of some of the suspects.

“In furtherance of the above, two Pump Action Riffles, three live cartridges, an ML-350 Mercedes Benz Jeep, a Toyota Corolla Vehicle which they used for the criminal activities and cash sum of Two Million, Five Hundred Thousand Naira which was part of the ransom they collected from the 2nd victim was recovered from the suspects.

“Six additional vehicles, one Honda Element Jeep, One Lexus 350 Car, Nissan Cabster, one Honda Accord Car, One Toyota Matrix Car and a Nissan Micra Car which they later confessed to have purchased from the proceeds of the criminal venture were also recovered from the suspects.”

Williams noted that the suspects have confessed to the crime and other series of high-profile kidnapping incidents previously executed in the state.

He said the investigation continues and further developments would be communicated in due course.