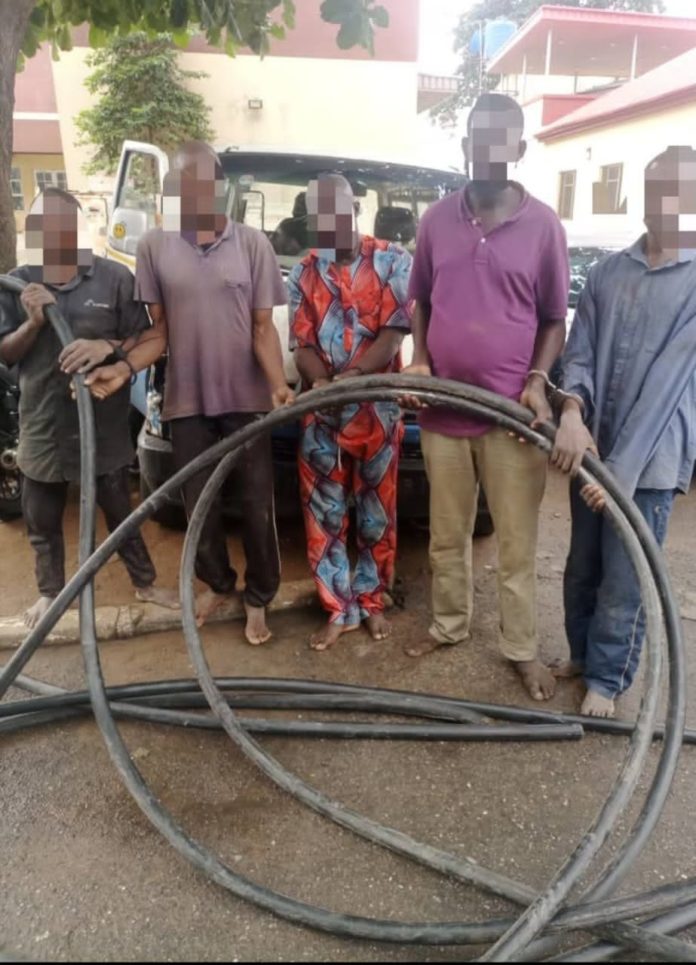 Five suspects have been arrested by operatives of the Rapid Response Squad (RRS) for stealing telecommunication cable in Ikoyi, area of Lagos.

The suspects identified as Yekini Mohammed aged 52, Mohammed Abdullahi aged 37, Tukur Mukaila aged 42, Abdulrazaq Abdulrahmon aged 25, and Danladi Nura aged 45 were arrested at about 2:30 am on Wednesday, September 8, 2022, by police officers on patrol at Oyinkan Abayomi, off Alexander Road, Ikoyi, with a white Volkswagen T4 bus with the registration number, KTU 357 YF.

NigeriaCrime.com learned that the suspects dug up a 20-meter long telecommunication cable which they were about to move into the white bus before they were apprehended. Also found in their possession were two diggers and two shovels.

On interrogation, the driver of the bus, Yekini Mohammed, explained that he was invited to the location by the others who are scrap and metal dealers to pick up scrap materials at different areas in Victoria Island and Ikoyi for delivery at Lakulaku, Obalende, where they sell them off.

Meanwhile, the Commissioner of Police, Lagos State Command, CP Abiodun Alabi, has directed that the case be transferred to the State Criminal Investigation Department (SCID), Panti for further investigation and prosecution.

In a related development officials of the Rapid Response Squad (RRS) have arrested an ex-convict for traffic robbery around the Ketu area of Lagos State.

The suspect, Emmanuel Sunday aged 32, was apprehended around 8:00 p.m. when RRS officials working undercover spotted him while trying to dispossess a motorist of his mobile phone at Ojota Underbridge.

Samuel disclosed that he was a few months ago arrested by Alapere Police Division for stealing, for which he was sentenced to a three-month jail term in Kirikiri Correctional Centre.