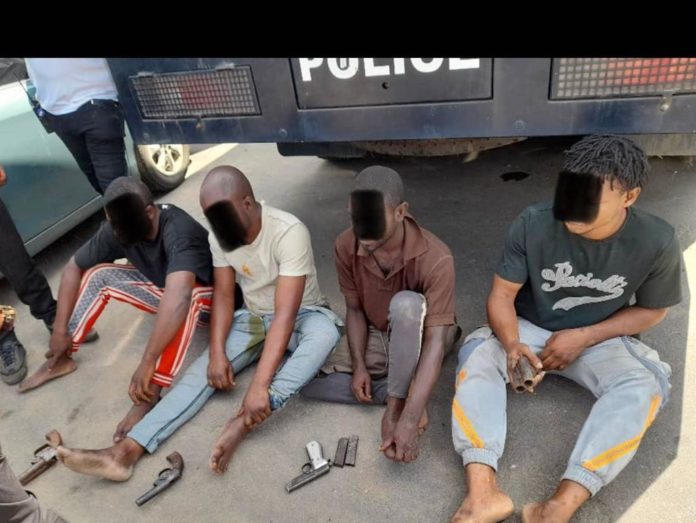 Four suspects specialized in snatching cars and terrorising residents in Iba and its environment have been arrested by the Lagos State police command.

NigeriaCrime.com gathered that their arrest was sequel to a swift investigation launched immediately after a report was received on August 7, 2022, that a 2010 Lexus RX 350 SUV, 2006 Toyota Camry saloon car, an iPhone, and other valuables were robbed at gunpoint.

Investigations reveal that the suspects were notorious for robbing their victims of their valuables and vehicles along the Iba-Igando-Egbeda axis of Lagos State.

Confirming the arrest, SP Benjamin Hundeyin, Police Public Relations Officer, Lagos State Command, said efforts are ongoing to arrest the criminal receiver of stolen goods, and possible recovery other items stolen by the gang in the past. Suspects will be arraigned at the end of the investigation.”

The duo was apprehended shortly after seizing a Toyota Corolla 2000 model with registration number LND-664-GF.

Abiodun Nurudeen (36) and Anthony Richard (45) were released on May 5 and June 5 from the Ikoyi correctional facility.

The suspects were caught following a tip-off from members of the public.