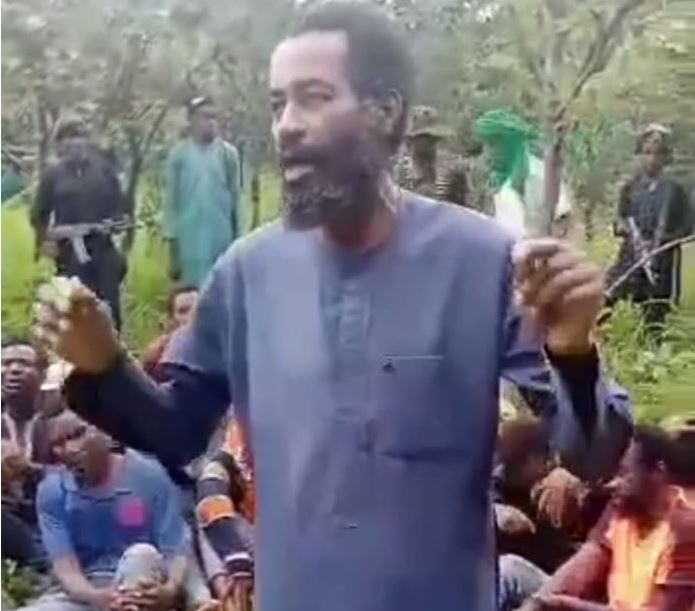 Nigeria has failed to rescue us….victims cry out

Clips of the released video reveal the remaining victims crying and wailing due to severe flogging by the terrorists.

One of the victims an elderly woman amongst the captives was seen weeping profusely pleading to the authorities to come to their immediate rescue, saying they don’t know what they have done to deserve such inhuman treatment.

Speaking in the Hausa language, on behalf of the victims, another victim who looked very pale, weak, and distressed, said that the government was insensitive to their ordeal.

According to him, “I am one of those involved in the train mishap. That train belonged to the Federal Republic of Nigeria. The Government has the responsibility to rescue us, but has failed.”

“This is why we are calling on the big nations of the world such as England, America, France, and the remaining international community, the likes of Saudi Arabia, to intervene in this matter to find a solution .”

“Truly, these people ( terrorists), their intention was not for us to even spend one week in captivity. They wanted their demands to be met so that they release us. But Nigeria showed no concern over this matter, showing no care.”

“We are therefore calling on these big nations of the world, France, Saudi Arabia, England and America, the international community, ECOWAS, AU, they should please help and intervene in this matter. ”

“They should come and help us so that a solution could be reached that will enable us to reunite with our families,” he said.

Amidst wailing and crying from the beaten captives, one of the terrorists said in Hausa that the Nigerian government should be blamed.

The terrorist wielding an AK 47 rifle, who was flanked by his colleagues all armed with some having their faces concealed, said that what was happening was the result of what a bad mother ( Nigeria) had caused her children.

The terrorist said ” you should understand, look properly it’s not our intention to, but it’s the outcome of what the Nigerian government is doing, setting a committee, a tea party in Kaduna to deliberate on how to rescue these people. They are there, enjoying the tea.”

“You should know that there is nothing that the committee can do. They can’t do anything. Are you not relying on guns? Your aircraft and your guns are like a spider’s web to Allah. We are for Allah, we are doing it for Allah. We are not afraid of anybody.”

“You should know that this is a little that you’ve seen. Know that, if our demands are not met, this place will become an abattoir,” he said.