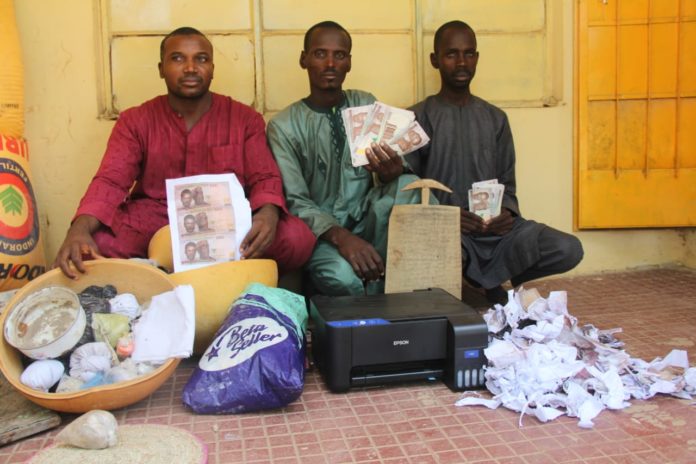 NigeriaCrime.com gathered that the suspects were arrested as part of the effort of the command to combat crime and criminality in the State.

Yusuf Mohammed was arrested near Ogbunna Hotel in Bayan Gari area of Bauchi with the sum of seventy-five-thousand-naira (N75,0000) counterfeit notes.

During interrogation, Yusuf revealed that he got the counterfeit notes from Shehu Shagari of Inkil area of Bauchi.”

According to the Command spokesman, SP Ahmed Wakil, one of the suspects Yusuf Mohammed was arrested with the sum of seventy-five-thousand-naira (N75,0000) counterfeit notes.

“A discreet investigation commenced in earnest, the following exhibits were recovered from the suspect; one 3-in-1 black printer, the sum of seventy-five-thousand-naira notes (N75, 000), five pieces of calabash containing charms, Twenty-two pieces of perfume bottles, one dried chameleon, one piece of white yard, and fourteen pieces of printed naira notes on A4 size paper,” he said.

SP Ahmed Wakil noted further that surveillance has been intensified to arrest the fleeing suspect.