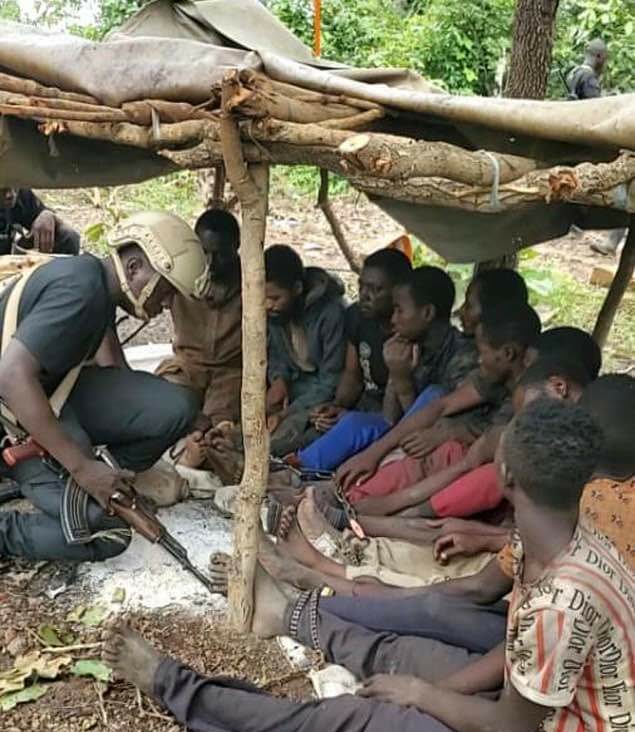 The troops of the Nigerian army  have rescued 10 hostages inside a forest in Igabi Local Government Area of Kaduna State.

The hostages were chained and bound with ropes like wild animals by their abductors.

In a statement on Tuesday,  Samuel Aruwan, Kaduna Commissioner of Internal Security and Home Affairs, the troops have rescued the hostages and have them transported to hospital because of their condition.

“The troops who came under further attack in the thick forest, successfully evacuated the hostages to a military facility where they are receiving medical attention before being reunited with their families,” the Commissioner said.

The Commissioner added that the troops also neutralized an unspecified number of bandits while clearing out insurgents at the camps while rifles, military uniforms and other items were recovered.

READ ALSO: Two Nigerians targeting $25m charged for $6.2m fraud in the US

“As disclosed in an operational feedback, the troops neutralized an unspecified number of bandits while clearing out insurgent and bandit camps at Apewohe in Chikun LGA,” he added.

“The operation extended to Dakwala and Kunai hills in the same LGA, where more hideouts were cleared, though no contact was made with bandits.

“Another camp was similarly dislodged at a location known as ‘Daban Lawal Kwalba’ in Igabi LGA, after the troops overpowered heavily armed bandits guarding hostages.

“The troops who came under further attack in the thick forest, successfully evacuated the hostages to a military facility where they are receiving medical attention before being reunited with their families.”

According to the Commissioner,, a camp was cleared at Rafin Gwaska, Igabi LGA, where the  items such as; Three locally made rifles, one AK-47 magazine, one AK-47 top cover; four Baofeng radio chargers, 11 mobile phones, three music boxes, two sets of military uniforms, one frag jacket and spanners, and knives and chains were discovered.

On his part, Malam Nasir El-Rufa’i, governor of the state, thanked the troops for the rescue.

He also commended the troops for the relentless spirit displayed in the ongoing operations, and encouraged them to sustain these efforts to ultimate victory.