We were paid N250,000 to kill station manager—suspects 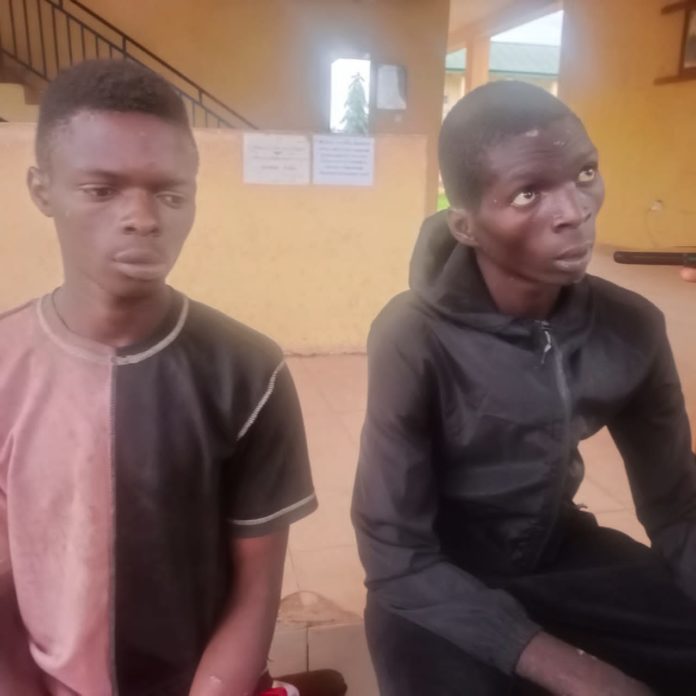 Two suspected murderers Adamo Aliyu, aged 24, and Yusuf Idris have revealed that they were paid, N250,000 to kill the manager of Mobil filling station in Ikire area in Osun state.

The duo confessed to have killed more than ten victims from whom they snatch motorcycles in Ikire area.

According to one of the suspects, Adamo Aliyu, who was paraded alongside other notorious criminals at the Osun Police Command Headquarters in Osogbo, “Yusuf and I have engaged in armed robbery since they were teenagers.”

Recounting how they killed a filing station manager to cover fraud, Adamo said, “my colleague’s, Yusuf Idiris’ father contracted us to kill the manager of Mobil filling station in Ikire.

We went there early hours in the money on the fateful day, the manager was sleeping when my colleague, Idiris hit him with a sledgehammer on the head. I quickly hit him with a wrench too.

Having been sure that he is dead, I ran into the office and picked up his bag, we found N100,000 in it and made away with it.

After killing him, we collected the N250,000 promised us, and then we sold about six other motorcycles earlier stolen from different victims among many other things.

Thereafter, I was given N1.5 million which I expended on smoking marijuana, buying designer clothes and drinking beers.

Speaking on their previous criminal acts, Adamo said, “I have lost count of the people we killed, they, (our victims) were majorly commercial motorcyclists.

“We don’t normally intend to kill them, we just hit them with a heavy object to disorient them, but if they struggle, we kill them and take away their motorcycles after dumping their body in the bush.

“The motorcycle we snatch, we sell them to Northerners who moved them to the north or sell to people from other places other than Ikire.

“I venture into stealing before I was ten years. I met Idiris around seven years old and we were carrying loads as our job. I later started learning bricklaying to feed my grandparents as I lose my parents as a child.

“When the money I earn through bricklaying no longer meet my needs, Idiris and I ventured into stealing and later armed robbery. I paid N12,000 for a goldsmith to fabricate a gun for me in 2019”.

Collaborating what his partner in crime said, Idiris said that they collected N250,000 to kill the station manager, but denied that it was his father that paid them to carry out the job.
It was an unknown woman, we met around Ife-Ibadan road that paid us to kill the manager.

Meanwhile, the Osun Police Command Public Relations Officer, Yemisi Opalola said the suspects would be arraigned in court after a thorough investigation.